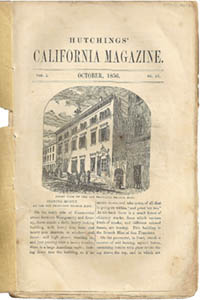 The October 1856 issue of the Hutchings' California Magazine provided a "tour" of the first San Francisco Mint.

Most books featured in this column contain, somewhere in their titles, words like “coins,” “money,” “currency” or “Mint.” A surprising amount of valuable numismatic literature, however, has no such words in the titles.

For example, the best description of the first San Francisco Mint — and the best illustrations of its building and coining processes — were published in the now-defunct Hutchings’ California Magazine. The October 1856 issue of Hutchings’ leads with a well-illustrated article on the 2-year-old San Francisco Branch Mint.

It begins with a “heavy” description of the Mint’s structure: “On the north side of Commercial Street, between Montgomery and Kearny, there stands a dark, heavy looking building, with heavy iron bars, and heavy-iron shutters to windows and doors. …”

It ends, nine pages and 10 engravings later, with the sardonic observation: “We are surprised at the aggregate amount of coin produced in so short a time, in such a small and very inconvenient building; for it seemed to us that every man was more or less in the others’ way. …”

In between, the anonymously-written article follows the path of a hypothetical deposit of California gold (still flowing from the state’s mines and waterways in some quantity as of 1856), through processes that transformed the raw ore into finished double eagles.

The anonymous author thanked Peter Lott, the San Francisco Mint’s first superintendent, for allowing him to visit the Mint, witness its operations, and make accurate illustrations of the workmen and their machines.

He describes the processes of weighing, melting, assaying, melting again, refining, melting yet again, rolling, annealing, drawing and cutting, cleaning, adjusting, milling, annealing a second time, coining, and finally sending the struck coins to the treasurer to be paid out.

The Mint, he notes, had developed policies to satisfy its customers: “A large amount of coin is always kept on hand so that depositors are not required to wait until the gold dust taken in, is coined; but the moment its value is ascertained from the Assayer, the value is promptly paid the depositor.”

All 10 engravings are well-executed, and capture the minting processes, 1856-style, from the furnace in the assaying room, to the benches in the rolling and cutting room, to the women weighing and filing in the adjusting room.

The author praises the mechanical aptitude of Chief Coiner John Eckfeldt; ironically, this scion of the Eckfeldt family, as Richard Kelly and Nancy Oliver have demonstrated, eventually stole thousands of dollars’ worth of gold from the San Francisco Mint.

The cramped building on Commercial Street was not destined to remain the nation’s westernmost Mint for long. In 1874, a splendid new granite edifice was built on Fifth Street.

Hutchings’ California Magazine is long gone. Its October 1856 issue, however, remains, as an unlikely yet indispensable record of American numismatic history.