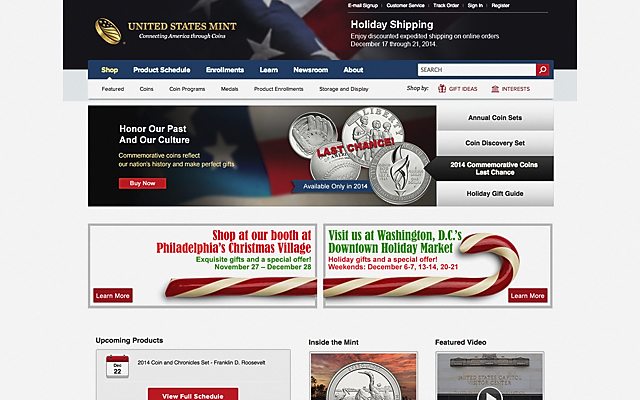 In the midst of a busy 2014 marked by Kennedy releases and curved coins, the U.S. Mint managed to pull off a complete overhaul of its website and online order management system.

Increased user-friendliness for desktop and mobile shoppers, enhanced order-tracking and improved customer support were all things the Mint aimed to accomplish with its new system that debuted Oct. 1.

The website also got a makeover, with a new home page, decluttered product pages, and an easier-to-find product schedule.

Before the new website went live, Mint representatives publicized the switch, walked media members through the new platform, and did not hold back their enthusiasm for the project.

“This is probably one of the most anticipated and important projects we’ve ever worked on,” U.S. Mint Director of Corporate Communications Tom Jurkowsky said.

Minor issues that surfaced just after the relaunch included ones related to customers with existing accounts having to re-enter credit card information and reset passwords.

“My dad and I got through fairly quick,” Jonathan Rufus Whitfield recalled. “Our order was complete about five minutes after opening.”

With the new system in place, 85,670 Kennedy half dollar sets were purchased in the first 12 hours they were available.

“We’re obviously delighted over the overwhelmingly positive reaction by our customers to our new order management system,” Jurkowsky said.