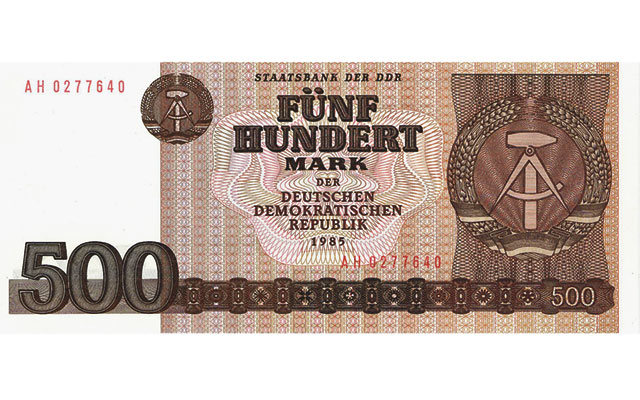 Unissued East German bank notes like this 500-mark note continue to pop up in circulation every now and then.

How did East German bank notes that were never supposed to be circulated surface in the collector market?

It’s an interesting story, according to an article published Nov. 3, 2014, on the German news website www.dw.de.

Freshly printed East German 200- and 500-mark notes have appeared in circulation in the years since the fall of the Berlin Wall Nov. 9, 1989, according to the article.

But how could that happen?

In 1991, the year after German reunification, all of East Germany’s now-worthless paper money was buried in two sandstone caverns near Halberstadt.

Following its 1994 merger with the successor to the East German Central Bank, the KfW Development Bank became the owner of the money. Thinking the notes were safely buried, no one gave the caverns much thought. But shortly after that, East German bank notes started surfacing once again on the collectibles market.

Thieves had gained access to the caverns, so the KfW Development Bank removed the bank notes from the caverns and destroyed them in March 2002. But 200- and 500-mark East German bank notes keep appearing, like those that recently surfaced in Frankfurt, where police are still investigating.

For more information about the story, visit the website.