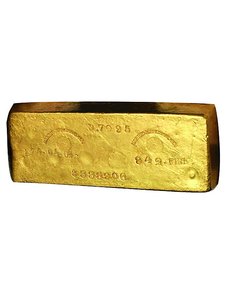 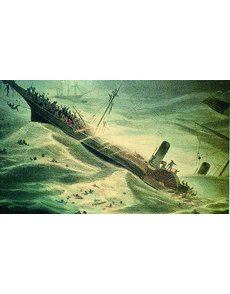 Painting shows the SS Central America sinking in the Atlantic Ocean during a September 1857 hurricane. Lost were many of the vessel’s passengers and crew, plus its cargo of gold ingots, gold coins struck at the San Francisco Mint and some pioneer gold coins. 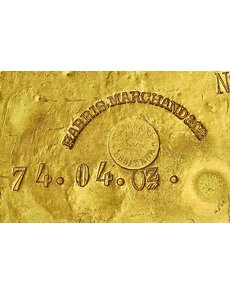 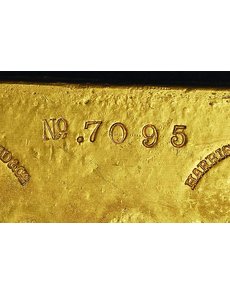 The serial number of the gold ingot is punched at the center top of the face of the ingot. 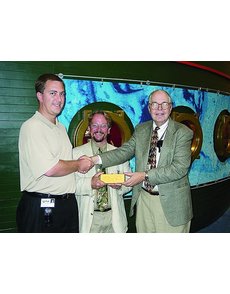 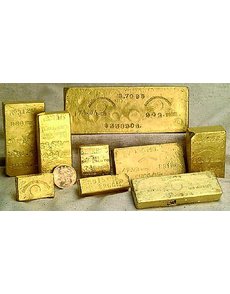 A Harris, Marchand & Co. gold ingot of the California gold rush era recovered from the 1857 shipwreck SS Central America, the only bar identified as being from the firm’s Marysville office recovered from the wreckage, is available to the marketplace for the first time.

The salvage firm that located the Central America, Columbus-America Discovery Group, found 37 Harris & Marchand gold ingots scattered amongst the ship’s wreckage on the floor of the Atlantic Ocean. Thirty-six of the ingots were from the firm’s main office in Sacramento, Calif., with just one ingot from the Marysville branch.

According to Stack’s Bowers Galleries, which is offering the ingot at private treaty, the 1857 Marysville ingot is unique. “It is identifiable by having different letter punches and other characteristics, and a somewhat smoother surface, than the ingots attributed to the main office in Sacramento,” writes Q. David Bowers, chairman emeritus of Stack’s Bowers Galleries.

A March 7, 2005, Coin World article identified Q. David Bowers as the owner of the ingot. Bowers was then numismatic director of American Numismatic Rarities LLC. Bowers said May 12 that he is now a partial owner and the other owner wishes to remain anonymous.

Bowers explained: “I had first opportunity to purchase any ingot. I studied a number of them and found this one to be different from any of the others — with two hallmarks, with different punches, and with different surface. At that time, August 2000 at the World’s Fair of Money in [Philadelphia], I had not completed my detailed study of the assayers, ingot characteristics, etc., which was subsequently done with [SS Central America researcher] Bob Evans taking the lead for technical aspects and me for historical considerations. I purchased the ingot but allowed it to remain with the Ship of Gold exhibit for a while. I was as excited as all get out as I studied the ingot and learned more about it.”

Bowers acquired the ingot from the California Gold Marketing Group, a consortium formed by Dwight Manley and John Albanese as equal and majority owners, along with Larry and Ira Goldberg, and Bowers, as minority owners. Many of the gold ingots recovered from the ship were publicly displayed in various venues in a Ship of Gold exhibit created by the California Gold Marketing Group.

The Harris & Marchand Marysville bar is described as a “Very large size ingot” in A California Gold Rush History, Featuring Treasure from the S.S. Central America, the 2002 book by Bowers published by the California Gold Marketing Group. The ingot weighs 174.04 ounces, is .942 fine and is stamped with a $3,389.06 face value. The mold used in casting the ingot measured 65 millimeters by 176 millimeters.

The Marysville ingot bears an assay chip at the upper left corner. Assayers would cut a small sample of a cast bar to test it for fineness. Many of the ingots recovered from the Central America display such assay chips.

All of the inscriptions are on one face of the ingot and appear with the bar horizontally oriented.

The ingot’s serial number is centered at the top of the face as no. 7095. The company name is stamped twice, one at left, one right, from a curved logotype reading harris, marchand & co.; beneath each company stamp is a second, coin-style hallmark showing an all-seeing eye with marchand above and essayeur below, and a five-pointed star to either side. At the center bottom is stamped $3389.06. The weight is punched as 174.04. oz. beneath the company logotype and hallmark at the left, with 942. fine. at right beneath the company identifiers.

The surface of the bar was finished by tapping with a hammer and bears smoother surfaces than the company’s Sacramento bars, according to Bowers’ book.

The circular hallmark is “reflective of Desiré Marchand’s training in Paris which earned him the privilege of having his own private stamp,” according to Bowers. No other firms’ ingots bore hallmarks of this nature. Slightly different hallmark dies were used in Sacramento and in Marysville.

Marchand was partner with Harvey Harris in the company. Harris was from Denmark. He served as a melter and refiner at the New Orleans Mint before moving to San Francisco, “where he worked at the [San Francisco] Mint as well as Kellogg & Co. (Kellogg & Humbert) and Justh & Hunter,” according to Bowers in the 2002 book. Marchand was from Belgium and, when a teenager, was a student at the Paris Mint.

The Harris, Marchand & Co. gold ingot was amongst the tons of gold coins and bars shipped aboard the side-wheel steamer SS Central America from the eastern shores of Panama destined for New York City in September 1857. The vessel carried tons of gold from the gold fields of California — ingots, coins struck by the San Francisco Mint, raw nuggets and even gold dust.

On Saturday, Sept. 12, the Central America encountered a hurricane in the Atlantic Ocean, which battered the steamer helpless. A press release from Stack’s Bowers Galleries details what happened: “Its boilers extinguished, and the structure damaged, the ship foundered in the sea, and then slipped below the waves, taking with it several hundred unfortunate souls and $1,600,000 in registered gold coins and ingots. ...”

The loss of the vessel with many of its passengers and crew members, and its cargo of tons of gold bullion and coins, represented a major personal and financial blow to the United States. Eventually, however, the loss of the vessel became known mainly to maritime historians.

“The ship was forgotten for many years, until in the 1980s the Columbus-America Discovery Group, based in Columbus, Ohio, sought to locate the wreck,” notes Stack’s Bowers Galleries. “Tommy Thompson, Bob Evans, and Barry Schatz undertook a study to learn everything possible about the long lost vessel. The accounts of survivors, who managed to escape by clinging to debris, rafts, and the like, and who talked with newspaper reporters, were studied in detail. The movement of the Gulf Stream current, estimates of the wind velocity of the hurricane, and information about the last known position were also studied. The result was the creation of a grid of hundreds of miles of area far off the coast. This was plotted into segments, and over a period of time studied by undersea camera and a sonar-like device.

“After many hopes and disappointments, what appeared to be the remnants of a ship’s sidewheel was discovered [in 1987]. Although many vessels had been lost in the area, relatively few were sidewheel steamers. Closer examination found coal and other debris on the bottom. A lump of coal was retrieved, taken to the court, and a claim was established for the unknown ship.

“In time, further explorations revealed what the discoverers called a ‘garden of gold’ on the ocean floor — double eagles, gold ingots, and more — in incredible profusion, a carpet of treasure! The discovery of the ship’s bell, with the maker’s name, confirmed that, indeed, this was the long-lost S.S. Central America! A specially constructed undersea submersible vehicle, the Nemo, explored the wreck at 7,200 feet below the surface, carefully grasping artifacts. In time, over 400 gold ingots and over 6,000 coins were recovered.”

An inventory of the Central America’s cargo revealed more than 5,000 newly struck 1857-S Coronet gold $20 double eagles, struck at the San Francisco Mint shortly before the treasure shipment was sent to the East.

In addition, more than 400 gold ingots of various sizes and shapes were included. These were the products of five different assaying firms, most prominently Kellogg & Humbert, a partnership formed by John G. Kellogg and Augustus Humbert, two famous individuals in Gold Rush history with offices in San Francisco. Justh & Hunter, with offices in San Francisco and Marysville, produced other ingots, as did Blake & Co., located in Sacramento, Henry Hentsch in San Francisco, and Harris & Marchand, which had its main office in Sacramento and a branch in Marysville.

“It is identifiable by having different letter punches and other characteristics, and a somewhat smoother surface, than the ingots attributed to the main office in Sacramento.”

For information about the availability of the ingot, contact Christine Karstedt or any other Stack’s Bowers representative at (800) 566-2580. ¦