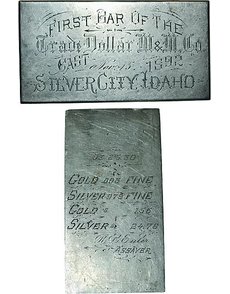 An 1892 silver ingot, the first made from silver mined at the Trade Dollar Mining and Milling Co. in Silver City, Idaho, sold for $12,210 during a May 1 auction.

A unique silver bar from the American West realized $12,210 in a May 1 auction in Minnesota.

The bar, described as a “discovery piece” by an expert in Western Americana, is reportedly the first one cast from silver mined at the Trade Dollar Mining and Milling Co. in Silver City, Idaho.

It contains more than 25 troy ounces of silver.

“It’s a heck of a piece of Americana,” said James Peterson, the auctioneer of the Edina, Minn., auction house that carries his name and that offered the lot.

“What a history that thing had! What are the chances of there ever being another one like this?” Peterson said.

The item was found by the anonymous consigning family, inside a safe deposit box, according to Peterson. The ingot was not from the Dr. Frederick Raymond Jr. estate that comprised some 90 percent of the 400-plus lots in the auction, Peterson said, but was from a different source.

The back of the ingot bears inscriptions relating its weight as 25.3 ounces, with a composition of .003 fine gold and .979 fine silver.

The gold value was listed on the bar as $1.56, while the silver was worth $24.76, as determined by assayer R.L. Euler, whose assay mark appears on the ingot.

The Trade Dollar Mining and Milling Co. was incorporated in Kentucky in July 1891, and by 1898 was headquartered in Pittsburgh, according to an 1898 commercial directory from Owyhee County, Idaho, home of Silver City.

One of the officers of the firm was Andrew W. Mellon, the philanthropist.

The company owned more than a dozen mines on the southern slope of the Florida Mountains, according to the directory.

By the 1898 publication, the property ranked with the best paying properties on the Pacific Coast, according to the directory, which also noted that the Trade Dollar in 1897 “paid larger dividends than any one mine in Cripple Creek [Colo.], according to published records of dividends.”

Fred Holabird of Holabird-Kagin Americana, geologist and expert in western mining history, said he was the underbidder for the piece and had no concerns about the authenticity of the “discovery piece,” a heretofore unknown item.

In the recent past, Holabird has warned collectors about unrelated purported western ingots that he believed to be recent counterfeits.

Peterson said that an anonymous collector of Americana from New York state bought the bar and intends to hold it in his collection.