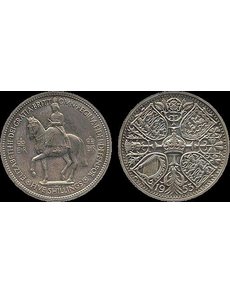 Stephen Fenton of St. James’s Auction has a knack of attracting choice rarities to be placed under the hammer.

Perhaps his interest in magic is what makes spectacular coins appear. The latest he has pulled out of the hat is a unique copper-nickel pattern of the 1953 Coronation crown, which will be offered for sale in a Feb. 4 auction.

The coin celebrates the state occasion that saw Queen Elizabeth II being crowned in Westminster Abbey in 1953; the anniversary of coronation will be celebrated throughout 2013.

“This coin should really be in a museum,” Fenton said.

A compelling story rests behind the making of the pattern.

When King George VI died in 1952, the Royal Mint was facing, for the third time in 17 years, producing a complete recoinage: a new royal effigy and reverses for, not just the United Kingdom, but a host of Commonwealth countries. Innumerable domestic and overseas seals also had to be redesigned.

Besides all that work, the Royal Mint set about commemorating the coronation with a coin (instead of the customary medal).

The Royal Mint submitted the designs of the 1953 commemorative copper-nickel crown to Buckingham Palace for approval by Queen Elizabeth II. This first-submitted design is what appears on the pattern being offered at auction.

Perhaps the officials were hoping for authorization to go through “on the nod,” with no objection. If so they were disappointed. The queen found the reverse, designed by Edgar Fuller and Cecil Thomas, too busy.

Fuller and Thomas set to work “shrinking” the design, using the same elements as appear on the first design — the central crown, the four shields of arms in saltire (the lion rampant of Scotland, the Irish harp and the three-lion passant of England represented twice). In the angles clockwise from noon appear the rose of England, the shamrock of Ireland, the leek of Wales and the Scottish thistle.

After the modifications were made, the coin was approved. It proved extremely popular, with nearly 6 million examples minted.

All designs had to be approved by the Royal Mint Advisory Committee on the Design of Coins, Medals, Seals and Decorations. Upon the unexpected death of George VI and the queen’s ascension to the throne, her husband, Philip Mountbatten, Duke of Edinburgh, was appointed president of the committee.

This was one of the first official roles the duke was given when his wife became queen. One can therefore speculate that the couple took a great interest in the new coinage. Against this background, the rejection of the initial design for the crown is more interesting. The duke chaired the committee for 47 years.

The reason why the pattern is not in the Royal Mint’s museum is unknown.