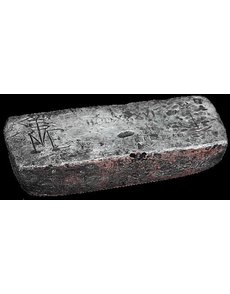 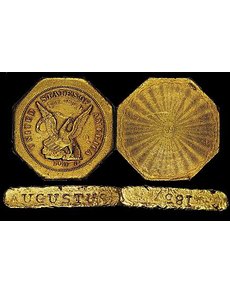 Unique, inverted AUGUSTUS on the edge of this Augustus Humbert $50 gold ingot that will be offered at auction by Holabird Kagin Americana in November in Reno, Nev.

A unique, inverted Augustus Humbert lettered-edge United States Assay Office gold $50 ingot will be among the lots offered Nov. 29 and 30 in the 2011 Grand Finale Auction conducted by Holabird Kagin Americana.

The two-session auction begins at 10 a.m. both days and will be held at the Atlantis Casino Resort in Reno, Nev.

Augustus Humbert was the first United States assayer in California. He was appointed by the U.S. Congress.

The ingot in the auction contains an inverted AUGUSTUS hand-stamped on the edge of the piece and an incomplete date.

“About 300 were ready for release on that date, which were the very first $50 slugs released into circulation,” according to Fred Holabird. “Each of these are of the rare lettered edge variety, with die struck obverse and reverse and individually letter or word gang punched edges containing the words AUGUSTUS HUMBERT UNITED STATES ASSAYER OF GOLD CALIFORNIA 1851.”

According to Holabird: “With a stiff production demand, mistakes in punching the edges were made, probably particularly at the onset of production. The coin offered in this sale is one of these early mistakes, containing an inverted ‘Augustus’ on the edge and an incomplete date.”

Holabird said the piece was graded Mint State 60 by Numismatic Guaranty Corp. and “is one of only a handful of Mist State first stage octagonal $50 ingots, and is the only known piece so attributed with these significant errors.”

Holabird said, “Since these early produced slugs were hand made, it makes sense that the mistakes are inconsistent, and through time, it is expected that other mistakes will be known such that a larger study group may emerge.” He said to date the piece is the “only known inversion of Humbert’s name, as well as an incomplete date.”

Holabird said the consignor “reached out to me because he felt there might be a story attached to it that might be hidden in history,” Holabird said. “At the time, he did not know that I’d been working on Moffat and Humbert for some time, having made several trips to National Archives and other archival facilities. The result is the chapter offered in this catalog which offers new research and information in this ongoing research project.”

Another showcase piece to be offered is a 100 troy pound silver ingot from the Nuestra Senora de Atocha. It is one of only four ingots of the original 962 silver ingots recovered from the shipwreck that weigh more than 100 troy pounds.

According to Holabird: “It is the fourth largest silver ingot recovered from the Atocha and was the finest and most ornately marked bar in the first Atocha auction held at Caesar’s Palace in Las Vegas in September, 1987. It has been in the hands of the original buyer since that time.”

Other lots in the auction include a collection of pioneer gold coinage; a collection of gold coins, gold tokens and gold in quartz jewelry; one of the two finest collections of more than 100 California counters and gaming counters; and high-grade ore specimens. Among the consignments is the Al Vinegar Collection of Indian Traders, Military, Arizona and New Mexico Tokens (pioneer minor coinage), which is “among the best ever assembled,” according to Holabird.

Several letter and document archives, including some of the earliest correspondence known from the gold mining camp of Murphy’s in Calaveras County, Calif., will be offered. Other consignments include part of a Walt Disney family archive that contains documents and correspondence dating back to 1912; the N.E. Johnson Collection of Nevada, California and Arizona photographs; revenue-stamped documents; and saloon jugs, bottles, tokens, ephemera, photographs, good-for mirrors and bawdy-related pieces including many pieces from European and Mexican brothels.

In addition, parts of the Lloyd Fenske, Gil Schmidtmann and Clint Maish collections of western mining stocks will be offered.

Lot preview will be from noon to 6 p.m. Nov. 28 at the Atlantis Casino Resort and remain open during both auction days. Bids will be accepted by telephone, fax, via email or in person at the live event.

The entire catalog with full color, high-resolution images will be accessible on iCollector.com by visiting the firm’s website at www.HolabirdAmericana.com and clicking on the link.

Holabird urges collectors planning to attend the auction in person to visit the online catalog prior to preview and come prepared with their lot list and questions.