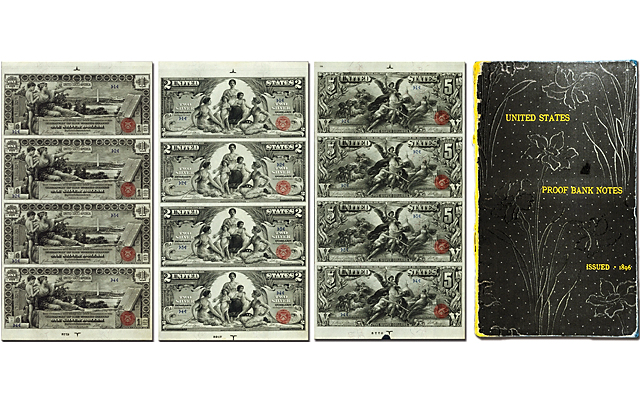 The first uncut, four-subject sheets of Series 1896 $1, $2, and $5 silver certificates and a bound folio titled United States Proof Bank Notes Issued 1896 will be offered by Stack's Bowers Galleries during the ANA show in August.

The first uncut four-subject sheets of Series 1896 $1, $2 and $5 silver certificates, pedigreed to the Harry W. Bass Jr. Collection, will be offered by Stack’s Bowers Galleries at the firm’s official auction for the American Numismatic Association World’s Fair of Money.

Notes on the three original sheets are serially numbered, individually, from 1 to 4. The firm auctioned the group several years ago for the Harry W. Bass Jr. Foundation. The sheets have been consigned by the buyer in that earlier auction. The uncut sheets were graded About Uncirculated 55 by Paper Money Guaranty.

The notes are often referred to as “Educational Notes” for their design themes, some of the most ornate of all American paper money.

The vignettes on the face of the notes hold distinctive names. The vignette on the $1 notes is known as History Instructing Youth; on the $2 notes the vignette is Science Presenting Steam and Electricity to Industry and Commerce; and the $5 notes bear a vignette called Electricity Presenting Light to the World.

The guilloche designs on the backs are ornate as well.

This set of three sheets was considered by Bass to be one of the highlights of his paper currency collection.

These particular sheets fall into an even more intriguing category, according to Stack’s Bowers, as the notes were produced for regular circulation and are the very first to have been serially numbered.

“It includes a typewritten, three-page letter of description and presentation by Claude M. Johnson, head of the Bureau of Printing and Engraving, who had the forethought to purchase the original sheets for himself, and thus, saved them for posterity. The sheets have been professionally removed from the book,” according to a news release.