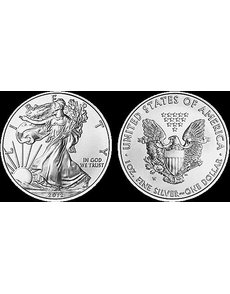 The beginning price for the coin is $45.95. However, as with all products sold by the United States Mint containing precious metals, pricing is subject to change to reflect changes in the spot price of silver.

The Uncirculated American Eagle silver dollar is struck on specially burnished blanks at the West Point Mint and bears the W Mint mark. Each coin is encapsulated in protective plastic and placed in a blue presentation case accompanied by a certificate of authenticity.

The finishes of the Uncirculated American Eagle silver dollar and bullion coin version vary slightly. Planchets for the collector version undergo an additional burnishing step not used for the bullion coins, which has led collectors and dealers to refer to the finish the Uncirculated coins bear as “Burnished Uncirculated.” Mint officials do not use that latter term, however, in describing the coins.

The coin’s obverse features sculptor Adolph A. Weinman’s rendition of Liberty as it appears on the Walking Liberty half dollar. The design celebrates Liberty striding confidently toward the sunrise, draped in the strength of the Stars and Stripes, and carrying branches of laurel and oak in her arms to symbolize both civil and military glory.

The coin’s reverse design by former United States Mint Sculptor-Engraver John Mercanti, depicts a heraldic eagle with shield, an olive branch in the right talon and arrows in the left.

A $4.95 shipping and handling charge will be added to all domestic orders.

There is no household order limit for the coin. ¦