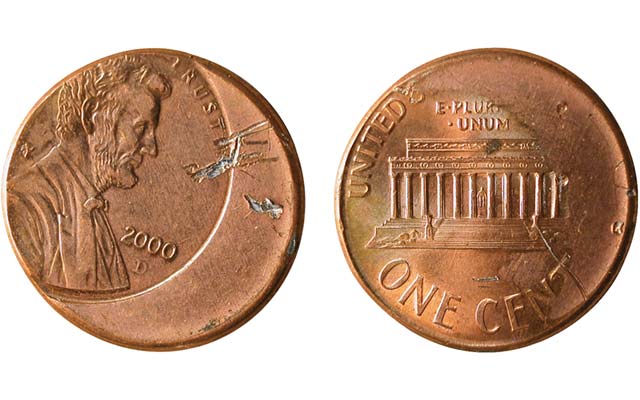 This broadstruck 2000-D cent shows what may be a pivoted die error affecting the obverse (hammer) die. The obverse face is shown in its position relative to a properly oriented reverse design pointing down in coin rotation. 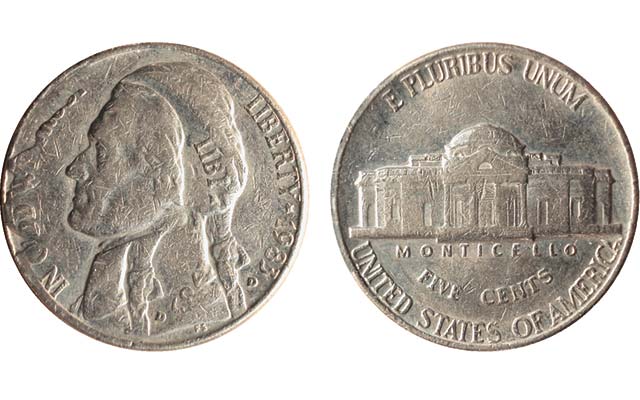 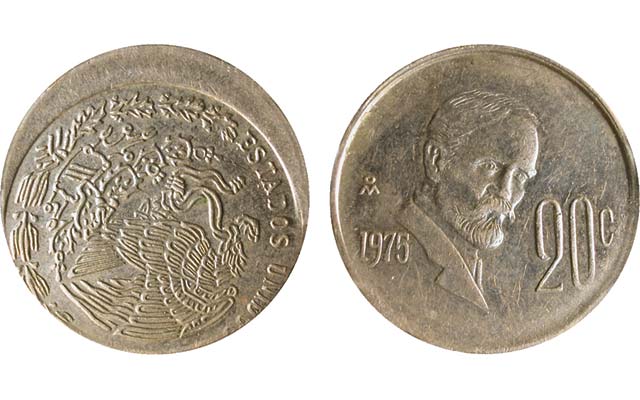 This 1975 Mexico 20-centavo coin displays a 148 degree clockwise rotation of the obverse (hammer) die. It’s a straightforward combination of a horizontal misalignment and a rotated die error.

Major vertical and horizontal misalignments are generally restricted to the hammer die, as its movements are unconstrained by the collar.

Some of the latter may actually represent a fourth alignment error — a pivoted die error. As the name implies, this involves a die assembly pivoting around an axis removed from the die’s center and possibly located outside the striking chamber. The path taken by the die describes an arc.

Since the term “horizontal misalignment” has traditionally been restricted to purely translational (sideways) die movements, I will use the nonspecific term “horizontal shift” when the nature of the alignment error is unclear. For similar reasons I’ve opted to use the  term “angular displacement” when referring to what may be either a rotation or a pivot.

Our first potential pivoted die error is a broadstruck 2000-D Lincoln cent in which the obverse (hammer) die shows a horizontal shift of 29 percent and a clockwise angular displacement of 23 degrees.

Our second candidate is a double-struck 1983 Jefferson 5-cent coin in which the first strike was normal and the second quite weak. The second strike shows a 26 percent horizontal shift coupled with a 25 degree clockwise angular displacement.

In both cases, these measurements are compatible with a pivoted die error, a horizontally misaligned and rotated die, or a devilishly complex combination of all three alignment errors.

Certain die clashes provide indirect and equally inconclusive evidence of pivoted die errors. Over three dozen “radically misaligned” die clashes are known from Lincoln cents minted between 1990 and 2000 (www.maddieclashes.com). The vast majority were produced by the light impact of an obverse (hammer) die that was tilted and horizontally misaligned to a remarkable degree (some over 50 percent). But a few, like MDC-1c-1996-01, can be interpreted as pivoted die clashes.

We can dismiss the notion of a pivoted die error for our last example, a 1975 Mexico 20-centavo coin. It shows a 12 percent horizontal shift and a 148 degree clockwise angular displacement. Any angular displacement much greater than 45 percent is too large to be accommodated by a pivoted die scenario. This error can therefore comfortably be classified as a combination horizontal misalignment and rotated die error.