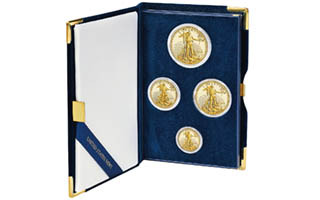 Sales, however. did not reach the maximum product limit of 15,000 sets. At the time of the sellout, the U.S. Mint was offering the set for $2,890. The latest sales figure available indicates 8,860 sets were sold.

The individual Proof American Eagle gold coins and and the four-coin set, including 1-ounce coin and fractional amounts, both went on sale April 3.

The 1-ounce coin with a single-coin product limit of 20,000 coins was reported sold out in August, leaving the four-coin set as the only product option to acquire the coin from the Mint.

The single half-ounce gold, quarter-ounce gold and tenth-ounce gold coins are listed on the Mint's website as no longer being available.

The half-ounce and quarter-ounce coins each had single coin product limits of 10,000, while the tenth-ounce gold coin had a single coin maximum of 20,000 coins. Adam Stump, deputy director of the Mint's Office of Corporate Communications, said the product limit represents the maximum number of an individual product the Mint will produce.

Gold Proof American Eagles were sold by the Mint according to an established pricing grid based on the closing spot price of the precious metal.