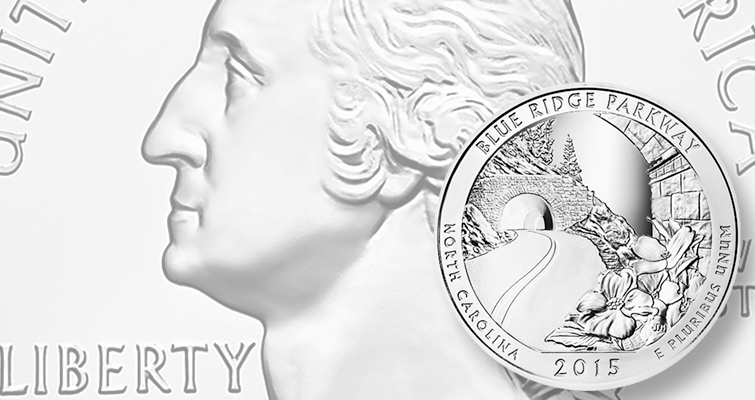 The U.S. Mint reported July 29 that its inventory of 2015 Blue Ridge Parkway 5-ounce silver bullion coins was sold out.

The authorized purchasers buy the coins from the Mint for the closing PM spot price of the metal per troy ounce on the London market on a given day plus a premium of $9.75 per coin and resell them into the secondary market at further premiums.

The Mint is still offering for sale the numismatic version of the coin — the Uncirculated 2015-P 2015 Blue Ridge Parkway 5-ounce silver coin bearing the Mint mark of the Philadelphia Mint where the coins are struck. The bullion version, sold out, is also struck at the Philadelphia Mint but does not carry the Mint mark. The Uncirculated numismatic coins are still offered, at $149.95 each.

The next 5-ounce silver bullion quarter dollar to be issued for sale to authorized purchasers under the America the Beautiful Quarters Program, for Bombay Hook National Wildlife Refuge in Delaware, is scheduled for release Sept. 30. The numismatic version is slated to be issued sometime in October.