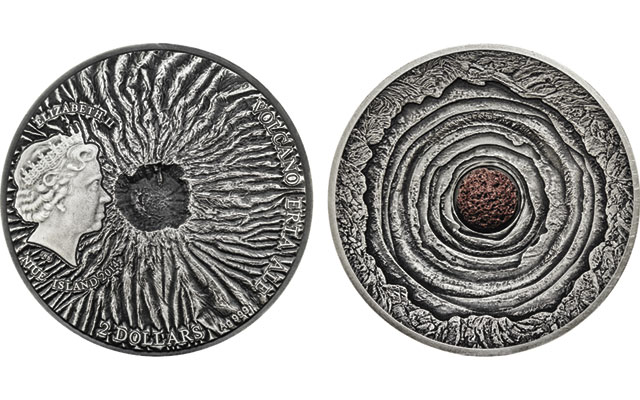 A 2014 silver $2 coin from Niue is the first in an annual series honoring volcanoes. An attached piece of lava from the volcano and the convex/concave shape of the coin together represent the Erta Ale volcano of Ethiopia. 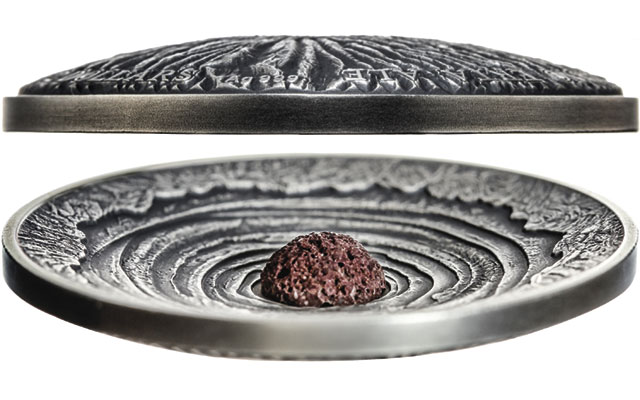 The 2014 Erta Ale coin from Niue was struck to an ultra high relief. Its convex obverse is shown in the upper image, and its concave reverse, with attached volcanic material, is shown in the lower image. 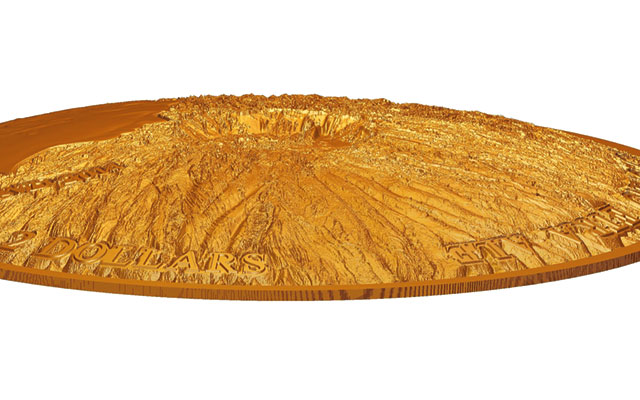 The Mint of Poland struck the Erta Ale coin, and employed ArtCAM software to speed the die production process. Here is a computer graphic rendering of the obverse as the coin was being designed.

A new ultra high relief coin from Niue features an artifact from the Ethiopian volcano that it commemorates.

The Mint of Poland has struck a new two-ounce, .999 fine silver $2 coin celebrating the Erta Ale volcano, and the coin is notable for both its convex/concave shape, and the piece of hardened lava added to the reverse.

Erta Ale is a shield volcano in remote Ethiopia, and is one of only five volcanoes with lava lakes in the world, according to a report at Slate.com.

The pair of lava lakes in its summit crater have been active for more than 90 years. That makes it one of the longest-active known historic eruptions, according to data provided by the University of Oregon’s Volcano World website.

The 2014 coin, which has an antique finish, is the first coin in the Volcanoes series that is scheduled to run five years, with one coin issued per year.

The coin is struck so that the obverse is convex and the reverse is concave.

The obverse shows the Ian Rank-Broadley effigy of Queen Elizabeth II, with the summit crater and the mountain topography filling the design. The name of the volcano, the queen, the issuing country, denomination, year of issue, and metal fineness are also part of the scene.

The reverse shows concentric rings surrounding a piece of lava from Erta Ale’s flow. The lava is glued to the coin using a proprietary adhesive.

First Coin Company had a sample of the coin just 10 weeks after the project was accepted, according to the company representative, Nick Karp.

Speeding the production process was the Mint of Poland’s use of ArtCAM software, he said. The company’s software allows tiny details to be modified or manipulated via computer, saving time. The software is geared toward computer-aided drafting and computer numeric control machines for an array of industries.

It has a mintage limit of 688 pieces and is packaged in a gift box with certificate of authenticity.

The coin retails for $349.90 through First Coin Company, with free shipping worldwide.

Deliveries are due to begin shipping by the middle of December, said Karp, but the coin is expected to sell out, and pre-orders are “strongly recommended.”