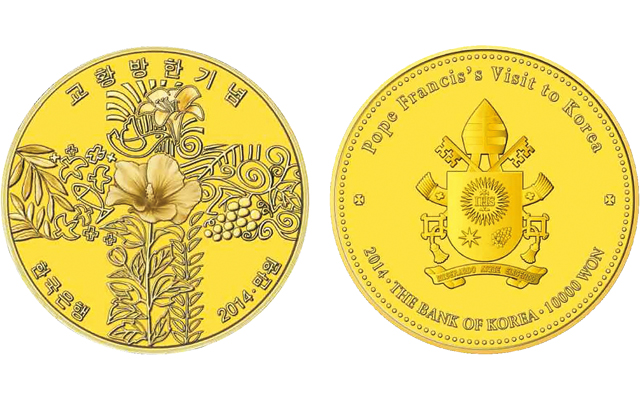 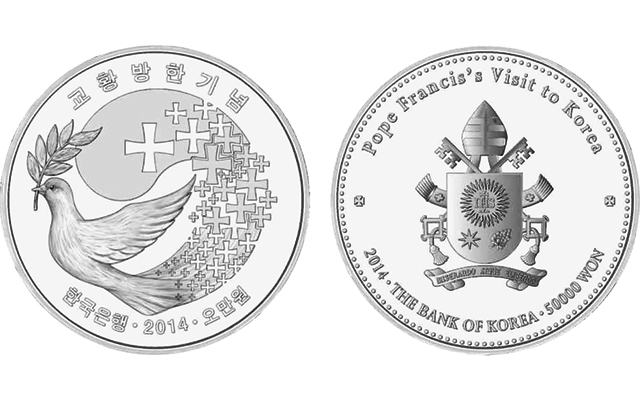 Pope Francis’ Aug. 14 to 18 visit to South Korea will be the subject of two future 2014 collector coins from the Bank of Korea.

During the visit, the new pope is scheduled to present four masses, including the final mass on the closing day of the sixth Asian Youth Day (held in Daegeon). The event is expected to draw young Catholics from 30 nations in the region.

The coins are meant to celebrate the visit and “to make widely known his message of peace and reconciliation, the purpose of the visit.”

The trip will be Francis’ first visit to Asia as the leader of the Roman Catholic Church. The Argentinian-born leader began his papacy on March 13, 2013, and was named Time magazine’s “Person of the Year” for 2013.

Both coins incorporate multiple symbols of Catholicism and Korean heritage. The reverse of each coin depicts the papal coat of arms of Pope Francis, with obverse designs specific to each version.

The Uncirculated brass (copper-zinc) 10,000-won coin shows a rose of Sharon, lily, olive branches, doves, fish, grapes and wheat, all arranged in the shape of a cross.

The Proof .999 fine silver 50,000-won coin shows the Taegeuk pattern (resembling two paired teardrops or commas), which is central to the flag of South Korea, with crosses, and a dove holding an olive branch in its beak.

The brass coin weighs 16 grams, measures 33 millimeters in diameter and has a mintage limit of 60,000 pieces. Of the total, 54,000 pieces will be for domestic sale in South Korea, with the balance available for overseas purchase.

The silver coin weighs 19 grams and measures 33 millimeters in diameter. It has a mintage limit of 30,000 pieces, with 27,000 available in South Korea and the rest for export.

The coins will be released Sept. 30, and distributors will be announced after the coins are released.