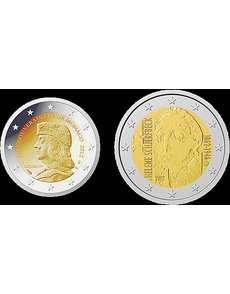 Monaco on July 1 released a €2 coin marking the 500th anniversary of the foundation of Monaco’s Sovereignty, and Finland made official plans to honor artist Helene Schjerfbeck on a €2 coin for release in September.

The €2 denomination is the only circulating coin with a design that can change annually in every nation in the eurozone, the group of 17 nations that issues euro coins.

Monaco and Finland join a long list of nations issuing circulating commemoratives for 2012: Belgium, France, Germany, Italy, Luxembourg, Malta, Portugal, San Marino, Spain and the Vatican City have all issued or announced plans to issue circulating commemorative €2 coins in 2012. In addition, a eurozone-wide program marks the euro currency’s 10th anniversary in 2012 with €2 coins.

All €2 coins are ringed-bimetallic pieces with a copper-nickel ring and nickel-brass center; each weighs 8.5 grams and measures 25.75 millimeters in diameter. On the noncommemorative side, all €2 coins feature the 12 stars of Europe in the ring surrounding a central common design.

Lucien Grimaldi, lord of Monaco, reigned from 1505 until being assassinated in 1523.

The anniversary years begin and end a French legend translating to “sovereignty of Monaco,” with two ornamental details framing the text. The inscription arcs above a left-facing image of Lucien. The portrait resembles a painting by Ambrogio de Predis that is in the Collection du Palais Princier de Monaco.

At the bottom, the horn of plenty Mint mark of the Monnaie de Paris and the fleurette hallmark of the Paris Mint’s engraving workshop flank the portrait on the left hand side and the right hand side, respectively. Above the Mint mark is the inscription LUCIEN I ER.

Finland honors artist Helene Schjerfbeck on a circulating commemorative €2 coin coinciding with the 150th anniversary of her birth. Schjerfbeck is known today for her realist works and self-portraits.

A stylized self-portrait of the artist appears at center, with the legend HELENE SCHJERFBECK at left, and the dual years 1862-1946 (the latter reflecting the year she died) on the right. The 2012 date and FI referencing Finland as the issuer also appear.

A total of 2 million coins will be released in September. ¦