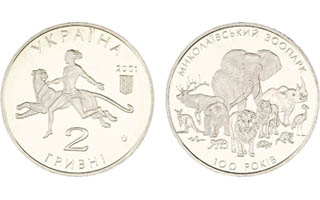 Animals on Ukraine’s 2001 2-hryvnia coin represent the continents from which the Nikolaev Zoo’s inhabitants hail.

Images courtesy of the National Bank of the Ukraine. 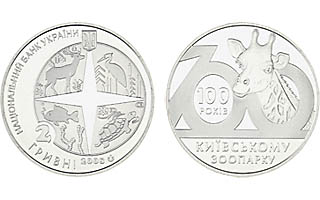 Ukraine’s second zoo coin, issued in 2008 for the Kiev Zoological Gardens’ centennial, is one of the most charming, with the giraffe head popping out of the word ZOO. The Kiev zoo, however, has been noted for animal abuse.

Ukraine has celebrated its zoos with two different coins in the last decade or so.

A lineup of wild beasts greets viewers of a 2001 2-hryvnia coin from Ukraine for the centennial of the Nikolaev Zoo.

The coin obverse shows Mowgli, according to the National Bank of Ukraine, with a panther.

This represents a 1978 statue called Mowgli and Bagheera that is now the zoo’s logo.

The mass of animals representing all continents from which the zoo draws its menagerie appears on the reverse, an elephant dominating a view that also shows a rhinoceros, kangaroo and lion.

The Nikolaev Zoo in 2003 became the first Ukrainian zoo to be accepted in the World Association of Zoos and Aquariums, confirming its mission to study, preserve and breed animals in captivity.

In 2008, the Kiev Zoological Gardens celebrated its centennial, and Ukraine issued a coin in commemoration of that event. This coin is one of the most charming of world zoo coins.

A single giraffe pops its head out of the second O of ZOO, inscribed on the reverse.

The obverse includes a compass rose dividing a scene into four parts, symbolizing mammals, birds, fishes and amphibians, all of which can be found at the Kiev zoo. The facility contains more than 3,500 species of animals and birds.

The Kiev zoo, sadly, represents the other side of the coin, relative to animal welfare. Activists have called for the closure of the zoo because of the large number of animal deaths. The European Association of Zoos and Aquaria expelled the Kiev zoo from the association over poor conditions and mistreatment of animals in 2011.