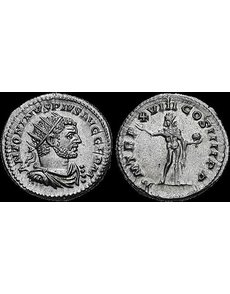 Struck in A.D. 215, this was among the first double-denarii issued. The obverse portrays the Emperor Caracalla (who reigned from A.D. 198 to 217) and the reverse shows the sun-god Sol. 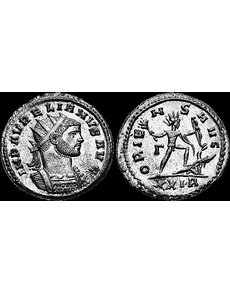 Aurelian (A.D. 270 to 275) is portrayed on this aurelianianus, his replacement coin for the ailing double-denarius. It was well-made and contained about 5 percent silver. 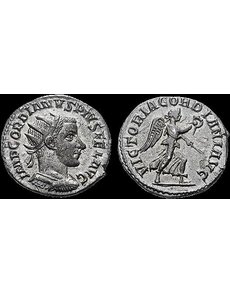 The double-denarius replaced the denarius as the standard Roman silver coin under Gordian III (A.D. 238 to 244), who struck this victory issue at Antioch in Syria. 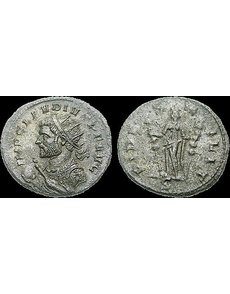 This double-denarius, which had a low intrinsic value, was struck in A.D. 269 by Claudius II Gothicus (268 to 270). He died of the plague after defeating the Goths.

Early in the third century A.D. the Roman Empire entered into a period of military anarchy that caused great economic stress.

Coinage fell victim to spiraling inflation and large quantities of coins were buried as a result. This grave misfortune has translated to a bounty for today’s numismatists, as the burial of so many treasures has made coins of this era among the most commonly available.

In this period gold coins often were struck at reduced weights and the value of silver coinage dropped through the effect of reductions in purity and weight.

By this time the silver denarius had been Rome’s principal silver coin for almost 450 years. It ceased to be struck under the emperor Gordian III (who reigned from A.D. 238 to 244) and was replaced by a relatively new coin, the double-denarius, which had been introduced in 215 by the Emperor Caracalla (A.D. 198 to 217).

Nowhere is it recorded why the double-denarius was introduced, though it may have been in an attempt to stretch resources. It is believed that the new coin was officially valued at two denarii since it bears the hallmarks of a double-denomination: male portraits are adorned with a radiate crown and female busts rest upon a crescent moon.

Averaging about 5.10 grams when it was introduced, the double-denarius had the silver content of only 1.5 denarii, as that denomination typically weighed about 3 to 3.4 grams. Since both coins were of similar purity (about 50 percent in this period), the new double-denarius appears to have been overvalued in relation to the denarius, perhaps to help compensate for Caracalla’s hike in legionary salaries.

The weights of coins on a piece-to-piece basis varied considerably. A quick survey of 50 double-denarii of Caracalla included coins ranging from 4.13 to 6.1 grams; an equally random sampling of 50 denarii from the year of Caracalla’s reform yielded a range of 2.67 to 3.62 grams.

The ancient name of the double-denarius is uncertain. Today it is best known as an antoninianus since a reference to argentei antoniniani in the Historia Augusta refers to Caracalla’s new double-denarius. Though that may have been what they were called when that work was composed, Historia Augusta is deeply flawed and was composed long after the use of the coin — sometime between A.D. 360 and 425 — so this information must be considered questionable.

Caracalla struck double-denarii up until his murder in April, 217. The denomination was then issued by his successor, Macrinus (217 to 218), and also by the next emperor, Elagabalus (218 to 222), who for unknown reasons appears to have ended the coin’ production in 219. The next two emperors, Severus Alexander (222 to 235) and Maximinus I “Thrax” (235 to 238), did not strike double-denarii.

The double-denarius was reintroduced in 238, a year of violent revolution. Three of the six emperors who reigned during that year struck this denomination, with the last of them, Gordian III (238 to 244), doing so on a large scale.

Gordian’s pattern of silver coinage was odd, suggesting the implementation of at least two changes in his monetary policy. From 238 to 241 he almost exclusively struck double-denarii, then, from 241 to 243 he issued both denarii and double-denarii, and from 243 to 244 only double-denarii.

After Gordian ceased production of denarii in 243, that denomination was rarely struck again. With one notable exception, later denarii all appear to have been ceremonial pieces. The double-denarius had now become the standard silver coin of the realm, and would remain so for the next three decades.

However, soon after achieving its supremacy, the quality of the double-denarius began to fall precipitously both in silver content and production quality. Early in Gordian’s reign the double-denarius was nearly 48 percent pure and was well made, yet by the early 270s it contained less than 2 percent silver and was struck haphazardly. In this period, the decline in silver coinage mirrors the decline in Rome’s fortunes as an empire.

In 274 the emperor Aurelian (270 to 275) reformed the empire’s coinage, improving the intrinsic value of his precious metal coins. In his reform the denarius was briefly reintroduced as a legitimate, circulating coin, as were some novel base metal coins. However, the ailing double-denarius was Aurelian’s main target: he replaced it with a similar, but improved coin often called an aurelianianus since it is described as such in an early sixth century A.D. text of Zosimus.

Strong opposition to Aurelian’s reforms was raised by workers accustomed to taking their cut of the silver passing through the mint.

They led a brazen revolt at the mint in Rome, an event described in the Historia Augusta and by the authors Eutropius and Aurelius Victor. Thousands of lives are said to have been lost in the siege of the mint facility. The date of the revolt is uncertain, and the loss of life is probably exaggerated, but it likely was associated with Aurelian’s reform of 274.

Despite resistance from mint workers, the double-denarius was replaced with Aurelian’s new coin, which was marked with a numerical formula in Latin (XXI) or Greek (KA). These inscriptions most likely indicate a ratio of 20-to-1, which accords with the approximately 5 percent silver of the alloy. Some authorities see the 20-to-1 formula as an indication of the value of this coin in relation to another, uncertain coin, which seems a less likely explanation.

Aurelian’s new coins had large, round planchets, were well struck with beautifully engraved dies, and had a heavy silver coating that was flashy and far more durable than the “silver wash” of the last issues of double-denarii.

The aurelianianus was struck by all of his successors up through Diocletian (284 to 305), one of Rome’s most ambitious reformers, who only stopped producing them in 294 or 295, when he completely overhauled the Roman coinage system. ¦