Trophy notes from the great outdoors 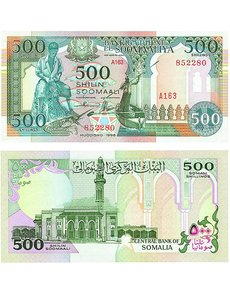 The face design of this 500-shilling note of Somalia has all kinds of links to fishing. A large vignette of a fisherman mending his nets is on the left edge, to the right of him are images of several fish and in the center is a man poling a boat. As a special touch, a vignette of a lobster appears in the lower left corner of the face design. The back vignette depicts a mosque.

Fishing — both for sport and commercially — is big business around the world. Although seafood is a minor part of most U.S. diets, fish and other sea creatures are a primary source of meat in many cultures.

A fair number of world bank notes display fishing scenes, but don’t expect to find on paper currency affluent anglers with $700 Orvis fly rods seeking mountain trout. Catching fish is a serious task — as in subsisting or grinding out a modest living — for many people, who seek everything from sardines to sharks.

Even with the growing number of trawlers that vacuum fish by the ton while at sea, nets, spears and hand lines are the main tools in what remains a low-tech venture for many commercial fishermen. It’s hard and sometimes dangerous work, and a wide range of vignettes involving the never-ending quest for the “big one” can be found on world notes.

The face design of the 50-riel notes issued by Cambodia from 1956 to 1975 are elegant-looking, featuring native fishermen tossing large nets on Lake Tonle Sap, which is one of the most unusual bodies of water in the world. For part of the year, the “lake” is something of a giant ditch. When the swollen Mekong River dumps into Tonle Sap, the lake becomes a vibrant, fish-filled inland sea that vastly expands in size.

Canada’s blue $5 note of the 1970s is a very attractive note. Sir Wilfred Laurier is honored on the face, but the real eye grabber is the salmon fishing boat on the other side. Crisp Uncirculated examples command strong prices for a relatively recent issue, but the cost is lower in circulated condition.

Africa usually doesn’t come to mind when fishing is the topic, but look at the prize catch on the back of the 10,000-franc notes issued by the Central African States. The note, first released in 1994, features a local scene of canoes, beach front and natives, all forming a design that could appeal to people outside the paper money hobby.

American anglers tend to have a low opinion of carp, but they are held in much higher esteem elsewhere. Carp are found in a wide range of colors and shapes, and the fish are especially prized in Asia and Europe. That explains why a crucian carp is displayed on the back of Denmark’s 50-krone notes that circulated from more than a quarter century beginning in 1972.

While marlin, swordfish and tuna are highly prized by big game seekers and commercial fishermen, many smaller species are caught for the table without much fanfare, such as bluegills, crappies and bullheads in freshwater, and hundreds of different species in every imaginable shape in the world’s oceans and seas.

Several examples of such “eating size” fish swim around the outer edges of the East Caribbean States $20 notes that have been in circulation since the 1990s. These aren’t the trophy species profiled in outdoors magazines, but sea creatures in the half-pound to 5-pound range that play a major role in feeding the world.

How about something from an obscure place? The lower half of a cod is the main theme of the Faeroe Islands 100-krone notes of recent years. An ocean scene covers the back. In case you’re wondering, the Danish territory sits directly north of Scotland and west of Norway. Fishing is the main industry and source of export revenue.

Commercial and sport fishing can be a solitary or group pastime, and a view of the-gang’s-all-here can be found on the back of Fiji’s $5 notes of the 1990s. The vignette of a dozen or more native fishermen pulling in a large net is something that may appeal to an impulse buyer. Hope their net is overflowing with fish, as dividing a meager catch among so many workers would be a sad experience.

The Gambian 10-dalasi notes enjoyed a long stretch in circulation by African standards — from 1972 to well into the 1990s. A small-scale fisherman in a canoe can be seen tossing a weighted net into a lake. Plan on spending around $10 in Crisp Uncirculated for this attractive note.

You won’t see any outboard motors or depth finders on Ghana’s 10-cedi notes of 1979 to 1982. The fishermen on the back of this green and purple note went out in search of the day’s catch with nothing more than sturdy wooden boats and nets. The note is a bit less expensive in all grades than the fishing-themed notes from Gambia. Collectors who prefer higher or unusual denominations can obtain the Ghana 2,000-cedi notes of the 1990s. Local fishermen are shown loading nets into a native boat on this affordable piece of currency.

The popular American stereotype of a commercial fisherman combines the ocean, frigid water and a stoic man in waterproof gear. Those elements come together on Iceland’s 500-krona notes that circulated from 1961 to the early 1980s. As is often the case with world notes, eye appeal and low prices are the pleasant outcome for budget-minded collectors.

Moving from coldwater whiting and cod fishing to the tropics, the boats shown on Indonesia’s 5,000-rupiah notes of 1975 are more advanced than the canoes seen on some notes, as these watercraft are rigged for sails.

The notes of Malawi often feature agricultural themes, so it’s no great surprise to see a native poling his canoe across the water in search of a meal on the 5-, 10-, 20- and 50-kwacha notes of 1995. Check out the striped fish watermark on both sides of these colorful notes. The red 5-kwacha notes are especially attractive, as they come with a design showing a quartet of zebras.

Peru generally doesn’t come to mind when maritime topics are discussed, but the South American nation has an ongoing commercial fishing industry. Check out the three guys dressed for constant exposure to saltwater spray on the back of the 1,000-sol notes of 1979 and 1981.

It isn’t always necessary to venture miles from shore to be successful at catching fish, as proven by the fishermen standing in waist-deep water on the Solomon Islands $2 notes that were issued in four different series from 1977 into the 21st century. As a special note the 2001 version is made from polymer.

Bank notes issued by Somalia also make it into the fishing net, among nations offering fish-related designs. The face design of the 500-shilling notes issued in 1996 has all kinds of links to fishing. A large vignette of a fisherman mending his nets, images of several fish, a man poling a boat and a vignette of a lobster all appear on the face of the note.

Even though enough fishing-related notes exist to keep a collector occupied for some time, it’s a field that could use some more variety. To name just three possibilities, Norway, the Philippines and Poland have long had successful and significant commercial fishing operations and it wouldn’t be inappropriate for those nations to issue a fishing-themed vignette on circulating notes.

The first nation that puts out a sport-fishing note is going to “catch” much attention from traditional paper money collectors and anglers. Cast that note out, and reel in the customers. ¦