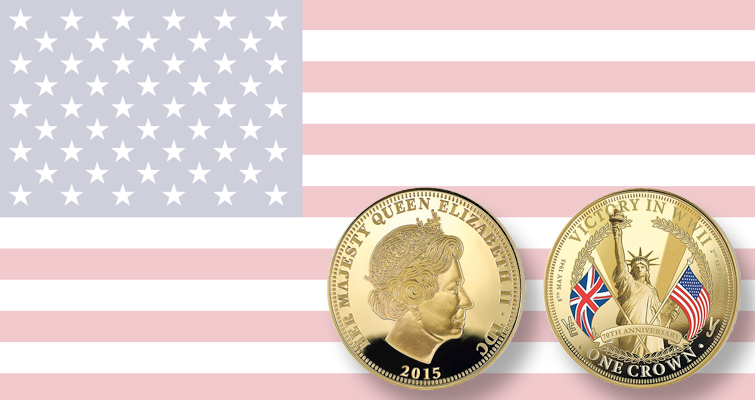 A Proof gold-plated crown coin from Tristan da Cunha marks the 70th anniversary of the end of World War II, highlighting the days in 1945 that the war ended in Europe (May 8) and in Japan (Aug. 15).

The last living sovereign to have served in uniform during World War II now appears on a 2015 coin marking the anniversary of the war.

The Bradford Exchange Mint on Sept. 15 launched a new legal tender crown coin collection to mark the 70th anniversary of World War II. The collection celebrates many pivotal moments of Allied victory during the war years, and the first coin, honoring V-E (Victory in Europe) and V-J (Victory in Japan) days, is now available. May 8, 1945, was termed V-E Day, and Aug. 15, 1945, V-J Day.

The Proof crown coin from the Commonwealth Territory of Tristan da Cunha is plated in .999 fine gold (the main composition was unavailable).

The obverse showcases the issuing authority, year of mintage and Queen Elizabeth II, the United Kingdom’s constitutional monarch. Before she ascended to the throne, the future queen served in the Auxiliary Territorial Service during World War II, making her the last remaining world leader to have served in uniform during the conflict.

The reverse features the Statue of Liberty before the famed “V for Victory” symbol, flanked by the dates of V-E and V-J days. The reverse also displays, in full red, white and blue color, the flags of the United States and Great Britain.

The coin measures 38.6 millimeters in diameter; its weight was unavailable at press time Sept. 18.

The coin is encapsulated and presented in a mahogany-stained deluxe wooden display box.

Future issues in the series will honor pivotal Allied victories in the war.

Each issue in the series will be limited to a mintage of 2,015 pieces.

To order, visit a special page at the Bradford Exchange Mint website.