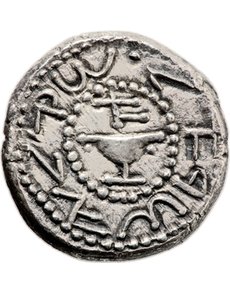 A trio of historic Judaean coins realized nearly $3 million on March 8-9 as part of The Shoshana Collection of Ancient Judaean Coins, offered by Heritage Auctions in a special event at The Fletcher-Sinclair Mansion (Ukrainian Institute of America) in New York. The collection, consisting of more than 1,800 coins in total, is expected to realize more than $10 million over multiple auctions this year, beginning with this auction.

The trio of rare and important coins consisted of the first silver shekel struck in Jerusalem by Jewish forces rebelling against Roman oppression in the first century AD, one of only two specimens known, which brought a world record price for any ancient Judaean coin of $1,105,375; an incredibly rare gold aureus of Titus as Caesar (69-79 AD), struck at an Eastern mint in 69 AD, likely Tyre, anticipating the subjugation of Judaea, which the Romans achieved with the fall of Jerusalem in 70 AD, which realized $956,000 and one of only two known surviving silver quarter-shekels of Year 1 (May 66-March 67 AD), which brought $896,250.

"The Year 1 silver shekel, the gold aureus of Titus as Caesar and the silver quarter shekel of Year 1 are all incredible pieces of history," said Cristiano Bierrenbach, Executive Vice President of Heritage Auctions," "That history, as evidenced by the impressive international attendance, spirited bidding both online and in person, along with the superb prices realized, shows that this history obviously continues to resonate today, more than 2,000 years later."

The Shoshana Collection was assembled over the course of four decades by an American collector and is the greatest assembly of ancient coins related to the foundation of ancient Israel ever offered, spanning more than 11 centuries.

Part Two of The Shoshana Collection is slated to come up for auction at Heritage this fall.