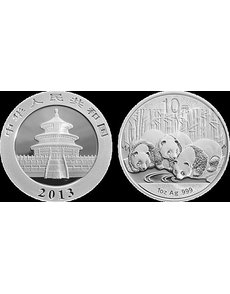 China’s Panda program for 2013 features three bears on the reverse design, a first for the series. The 1-ounce silver 10-yuan coin has a mintage limit of 8 million pieces.

For the first time since the program began in 1982, China’s annual issue features three pandas in the design.

In total, 10 different sizes, metals and denominations are available in 2013: seven gold coins and three silver coins. Six coins — five gold and one silver — are offered as bullion products, with the balance offered in Proof versions. Each of the 10 coins is offered in a single finish.

The flagships of the program are the bullion 1-ounce coins, the .999 fine silver 10-yuan piece and .999 fine gold 500-yuan coin. In addition, the program features bullion twentieth-, tenth-, quarter- and half-ounce gold coins.

The Proof coins are 5-ounce and kilogram-sized, in both silver and gold. All the coins are struck to .999 fineness.

China entered the gold coin market in 1983 with Panda gold coins, including 1-ounce and fractional sizes. Ostensibly the coins were bullion issues, but these early Panda coins carry a numismatic premium arising from the marketing method used to sell them and low mintages.

Proof silver versions debuted in 1983, but bullion examples of the silver coins did not appear until 1989 (when the fineness was increased).

Unlike some bullion coins, the reverse designs have changed every year, with the exception of 2002.

The obverse of each Panda coin shows the Hall of Prayer for Good Harvests (the Temple of Heaven). Four different views of the temple have graced the canvas during the program’s tenure.

China’s Panda coins are minted at three facilities — the Shenzhen Guobao, Shenyang and Shanghai Mints — and are generally not distinguished by a Mint mark.

Stated mintage limits for the 2013 coins remain at the same levels as for the 2012 coins.

The coins were released Nov. 22, and the United States distributor was taking delivery of some of the coins at press time in mid-December.

Distributor PandaAmerica offers the 1-ounce silver coin for $46 each. Pricing and availability for the other sizes was unavailable.