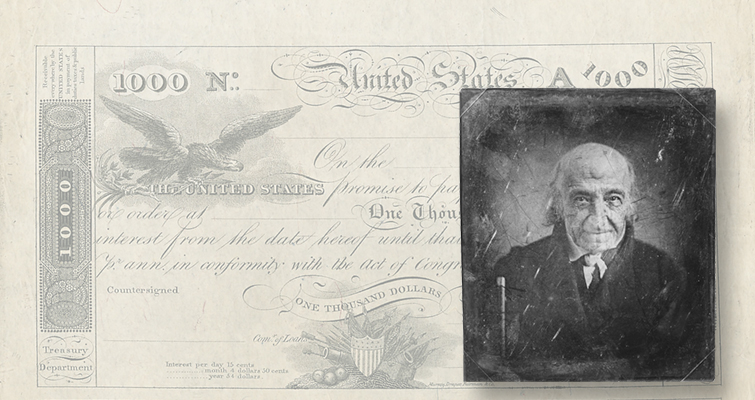 In 1810, U.S. Treasury Secretary Albert Gallatin, depicted in this daguerreotype, recommended Treasury notes as a source for raising government revenue. Congress didn’t oblige with its first authorization until June 30, 1812, 29 days after President James Madison recommended to Congress a declaration of war against Great Britain. 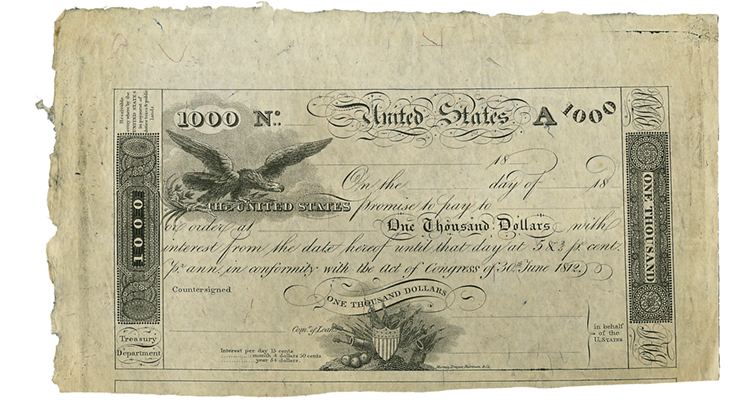 Congress first authorized Treasury notes on June 30, 1812. Only $100 and $1,000 notes were printed under that authorization. Illustrated is an unsigned $1,000 “remainder” note. It is one of three examples known. 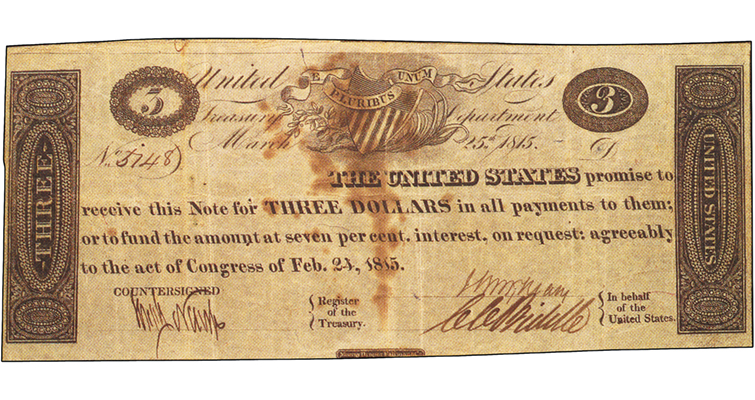 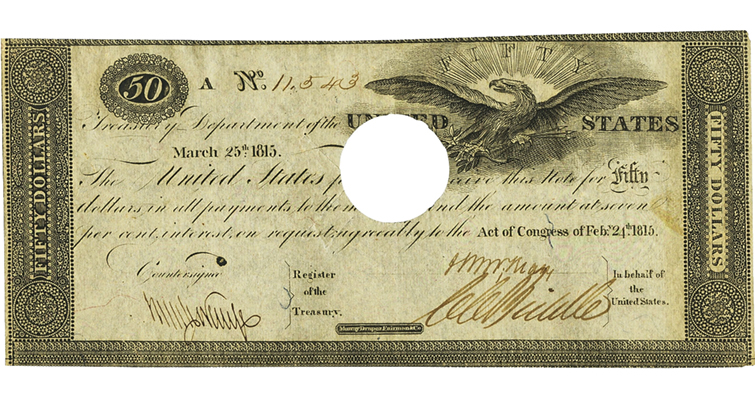 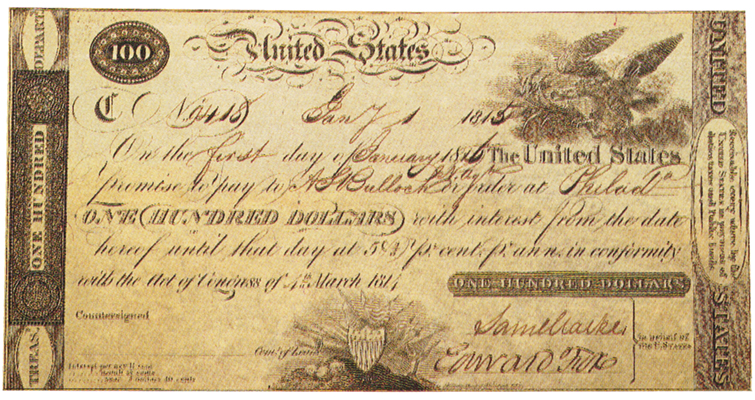 Authorized March 4, 1814, this $100 remainder note is dually signed by Sam.[uel] Clarke and Edward Fox. The note would have borne a 5.25 percent interest rate for one year, redeemable upon presentation. 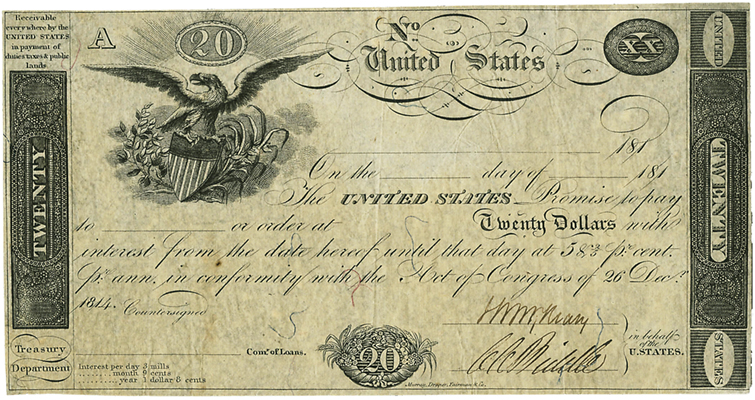 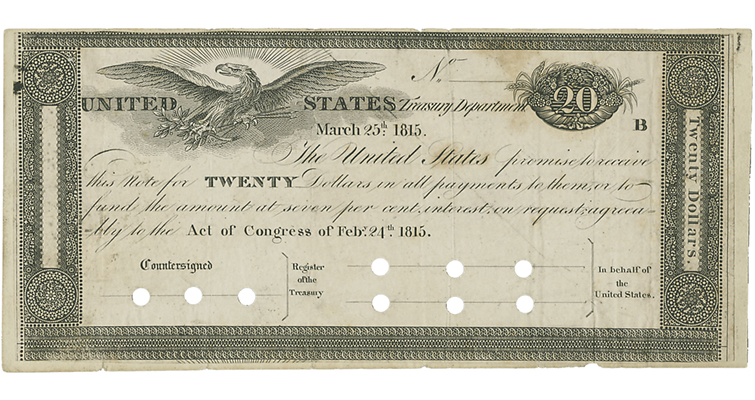 Faced with the dilemma of having to raise sufficient capital to finance a pending war with Great Britain and maintain stability domestically, the federal government was forced in 1810 into borrowing for the short term.

The U.S. Treasury Department needed a solution in the interim to execute business that normally would have been conducted through the Bank of the United States.

The answer for Albert Gallatin — who served as Treasury secretary during President Thomas Jefferson’s two four-year terms in office and most of James Madison’s presidency — was the issuance of privately printed Treasury notes.

Issued between 1812 and 1815, these notes became widely known as War of 1812 notes, since it was this conflict for which the federal government needed significant financial support.

According to Gene Hessler and Carlson Chambliss in their reference The Comprehensive Catalog of U.S. Paper Money, two distinct series of Treasury notes are classified under War of 1812 issues.

The second series, Treasury notes issued under 1815 congressional action, are considered by many numismatists and researchers to be the first U.S. paper money to officially circulate since the June 21, 1788, ratification of the U.S. Constitution.

According to Donald H. Kagin in the September/October 2005 issue of Paper Money (the journal of the Society of Paper Money Collectors), the 1812 to 1814 notes proved to be extremely useful as they were transferable by delivery and receivable for duties, taxes and public use at par plus accrued interest.

“They also served as interest-bearing reserves for banks since they were convertible into any kind of money and bore interest simultaneously.”

The 1815 notes, fully subscribed to and accepted by merchants, “indirectly served to increase the circulating medium of the country,” according to Kagin.

“They were used to buy goods and services by individuals, pay customs duties by merchants, and acted as cash reserves for banks, preventing bank notes from being discounted,” Kagin wrote.

Collecting War of 1812 notes is a specialized field in paper money. Cost for examples will range from the upper hundreds of dollars into the tens of thousands of dollars, depending on condition and rarity.

When the First Bank of the United States’ 20-year charter was not congressionally renewed in 1811, Gallatin had to resort to alternatives to resolve the nation’s revenue shortfalls with the outbreak of war looming.

Until the financial emergencies presented by the War of 1812, the federal government maintained a hard money policy.

Madison believed authorizing paper money “might lead to mass abuse and proliferation, reminiscent of the vastly depreciated Continental Currency,” according to Kagin.

Unable to advantageously sell long-term debt, having no bridge loan capabilities and with the First Bank of the United States gone, Gallatin recommended the use of Treasury notes, a funding alternative he had first proposed in February 1810.

Congress did not oblige Gallatin’s Treasury note plan until June 30, 1812, 29 days after Madison petitioned the nation’s legislators for a declaration of war against Great Britain.

All of the War of 1812 notes issued under the five issuing acts were printed by one firm — Murray, Draper, Fairman & Co. in Philadelphia.

The firm evolved from a bank note engraving business established in 1795 by Robert Scot, chief engraver of the United States Mint. Draper had served an engraving apprenticeship under Scot’s tutelage.

The partnership of Murray, Draper, Fairman & Co. dissolved in 1818.

All of the War of 1812 notes are uniface, with the issued notes printed on extremely thin paper embedded with silk fibers for added strength. Several of the note proofs — examples printed as a means of checking whether or not the design is suitable for putting into full production as a currency issue — exist on cardboard.

Some notes have been punch canceled, often with a large hole measuring approximately 25 millimeters in diameter, the size of a U.S. quarter dollar.

According to the Hessler-Chambliss book, the notes issued from 1812 through 1814 were printed and issued as one-year notes bearing 5.25 percent annual interest.

“Issued notes of 1812 to 1814 bear the signatures of two government officials, a serial number, the actual date of issue, and the name of the payee as well as the local in which the note of issue was to be paid,” according to Hessler-Chambliss. “A space was also provided for a countersignature, and this was filled in on most issued notes.

“The notes issued in 1815 had spaces for two government signatures as well as a countersignature, but the name of the payee and locale of payment were no longer filled in.”

Limited numbers of issued notes bearing signatures are known to exist in various denominations from the other three acts.

There are also what are referred to as “remainder notes.”

Paper money specialist and author Wendell Wolka, who pens the Coin World column “Collecting Paper,” defines a remainder as “a note that is missing any or all of the normal penned information if spaces have been provided for that information.”

“So even if a note has a full set of signatures, but is missing the date and/or serial numbers it is a note that never saw circulation and is therefore a remainder,” Wolka said via email.

According to Hessler-Chambliss, the collector value of a War of 1812 note depends upon whether the note was issued, is uncanceled and bears three signatures; was issued, but canceled; is an unissued remainder note; or a proof.

Design varieties are known for some issues and denominations, based on differences in placement of text and signatures.

The functionality was different for the War of 1812 Treasury notes issued under the Act of Feb. 24, 1815. The designs were also different from the first four issues.

The $3 to $50 notes did not bear interest, but were convertible into 7 percent government bonds.

The $100 notes bore annual interest of 5.4 percent and were convertible into 6 percent stock of the United States, according to Hessler-Chambliss.