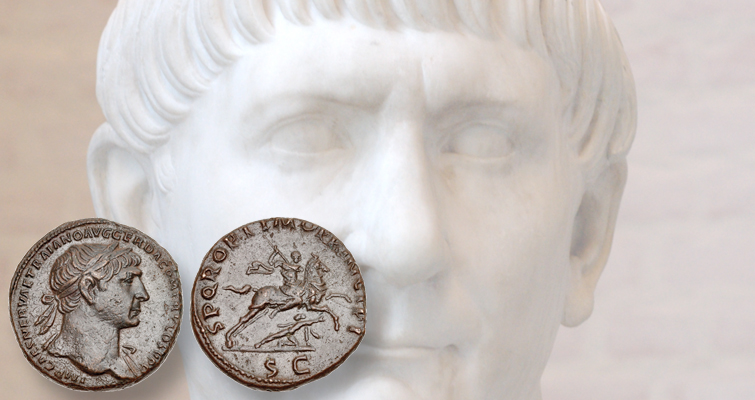 This copper as of Trajan from A.D. 106 to 107 shows the emperor on horseback preparing to spear a Dacian soldier who tumbles to the ground in the midst of flight. 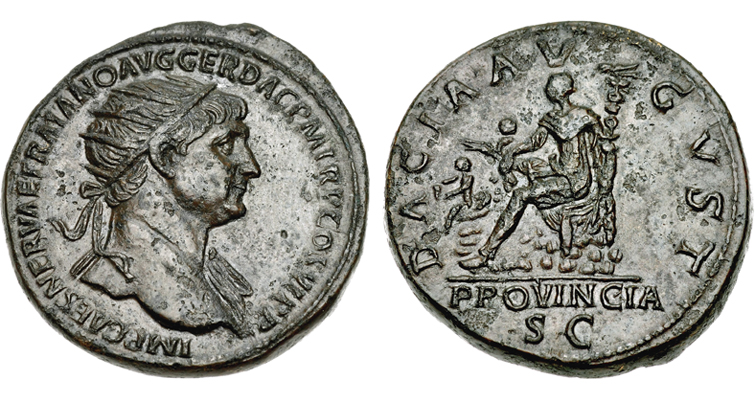 On this brass dupondius of A.D. 112 to 114 Trajan celebrates his conversion of Dacia into a province, here represented as a woman with children seated on a rocky outcrop. 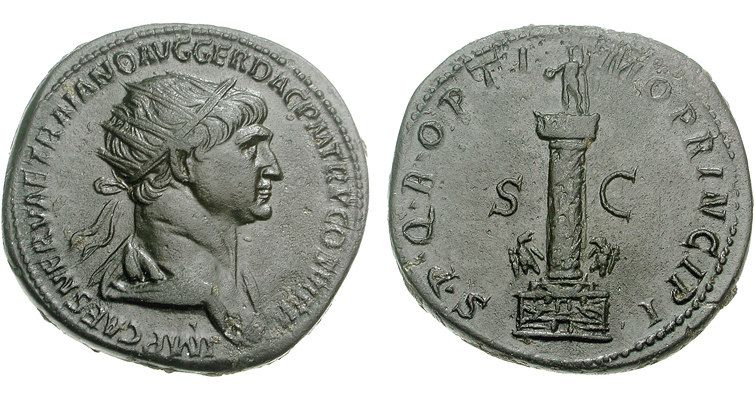 Another brass dupondius of A.D. 112 to 114 depicts Trajan’s Column. One of the most impressive of all Roman monuments, it commemorates the hard-won victories in Dacia. 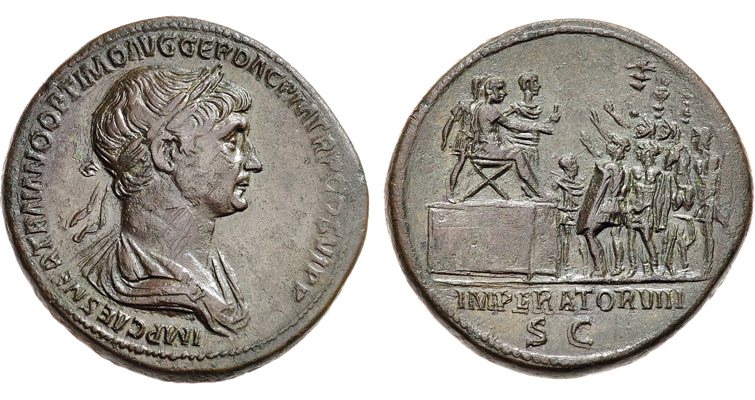 This brass sestertius was struck in the period A.D. 114 to 116. It shows Trajan upon a platform, addressing a group of soldiers he had led on his Parthian campaign. 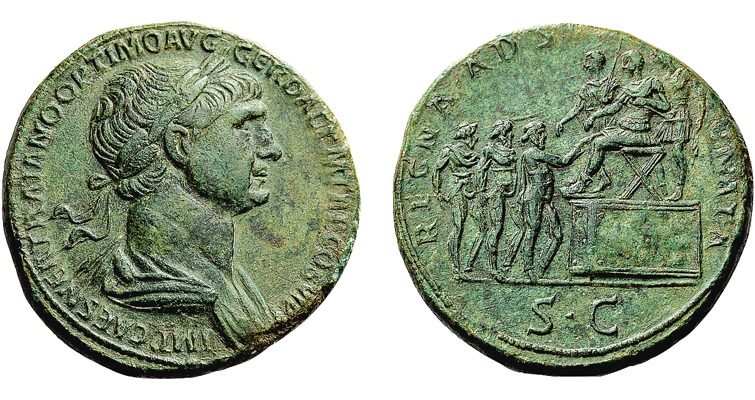 Also dating to the period A.D. 114 to 116, this brass sestertius’ reverse design shows Trajan upon a platform, receiving three kings the Romans had allowed to rule Eastern regions. Trajan is accompanied by an attendant.

Late in the reign of the emperor Trajan (A.D. 98 to 117) the territory of the Roman world reached its zenith.

For a brief period Rome had flexed its muscles to such an extent that the world took notice: Romans ruled from the shores of the Atlantic to the Indian Ocean and it might have seemed there was no limit to how the empire would grow.

However, this singular achievement was unsustainable. Trajan’s successor, Hadrian (A.D. 117 to 138), had no choice but to draw back the borders to a more manageable size. Most of the recent gains — except Dacia and Arabia — had to be abandoned.

Trajan’s two major conquests took place in Dacia and the Parthian Kingdom, both of which were beyond Rome’s established borders. In each case the territories were occupied by people with a history of hostility toward Rome and its interests, and Trajan intended to minimize their potential for causing harm.

It is impossible to know the details of Trajan’s grand scheme. Did he believe Rome could rule these far-flung regions over the long term, or did he merely hope to inflict some stinging defeats while gaining personal glory and filling Rome’s coffers?

In the case of Dacia, a region north of the Danube River that constitutes modern Romania, Moldova and some surrounding areas, we might suspect he had a long-term view in mind. In two campaigns against the warlike Dacian King Decebalus, he did much to preserve the security of Rome’s Balkan provinces by taking his war north of the Danube and striking deep into Dacian territory.

His first campaign occurred from 101 to 102. Trajan found much success and forced Decebalus to sue for peace, which was granted. However, within a few years the Dacian king again caused trouble for the Romans, and in A.D. 106 Trajan mounted a new campaign known as the Second Dacian War.

This time Trajan finished the war in the strongest of terms. He routed the Dacians so severely that within months Decebalus had to flee. He committed suicide rather than be taken alive to Rome as a trophy for Trajan’s well-earned triumph.

After his victory Trajan converted Dacia into a Roman province. It was a good course of action as it pushed the border of Rome’s Balkan territories well beyond the Danube. Also, Trajan acquired control of many resources in Dacia, including productive mines that the Romans exploited for more than 150 years.

Financial gain also came in the form of people, for the Romans may have sold as many as half a million Dacians into the slave markets. In their place the Romans encouraged people from outside Dacia to settle the region, which required the construction of cities, fortifications and roads.

Trajan issued many coins marking his victories in Dacia. The most common types show the emperor on horseback spearing a fallen Dacian warrior, or the personification of Dacia mourning while seated on a shield, amid arms and armor, or at the base of a trophy. Other types show the decapitated head of Decebalus under the foot of Trajan, the goddess Roma or Pax, the personification of peace.

One important type shows the personification of Dacia with two children — one holding grapes, the other heads of grain — upon a rocky outcrop. In this case the inscription DACIA AVGVST PROVINCIA makes reference to the newly created province.

It was prompted by a diplomatic affront by the Parthians, Rome’s traditional enemy in the East, who had installed their own candidate on the throne of the buffer-state of Armenia. It was an affront that Trajan could not afford to ignore, and he left Rome in October 113 to deal with the situation.

He established his headquarters at the city of Antioch and in the following year he campaigned in Armenia. Early in 115 Trajan led forces into northern Mesopotamia and Adiabene, an area in modern Iraq. In the next campaign season he led his legions back to Adiabene and then on a long march following the Tigris River into the heart of the Parthian Kingdom.

By mid-116 the Romans had sacked the Parthian capital of Ctesiphon and stripped it of all portable wealth. Trajan then visited Babylon and made an excursion to the Persian Gulf, a place few Romans had ever seen. Any control the Romans could gain in this region would have a profound effect on safeguarding the lucrative trade routes to India.

Trajan crowned his victory by proclaiming a certain Parthamaspates king of Parthia. Since the new king was of a pro-Roman disposition, Trajan hoped to maintain influence over the defeated nation, even from afar. Similarly, he had installed puppet-kings in Mesopotamia and Armenia.

However, almost as soon as the campaign had ended it was clear that Trajan had reached too far. All of the resources and attention required to mount the campaign had taken a toll. The new Parthian king did not fare well and revolts soon erupted in Armenia, Mesopotamia, Cyprus, throughout North Africa, and even in Dacia.

Just as Trajan was moving westward to deal with some of these uprisings, he died in Cilicia, a region in the south-eastern part of modern Turkey.

If possible, the coin types Trajan issued for his Parthian campaign are even more elaborate than those for his conquest of Dacia. The most stunning types show multiple figures, all engraved in the finest style of the period.

On three impressive types, Trajan is shown seated on a platform, accompanied by one or more attendants. Approaching the platform are either the new Parthian king (with a host of Roman soldiers in the background), a group of three newly appointed foreign kings, or a gathering of soldiers who express their allegiance to the emperor.

Another memorable type shows Parthamaspates kneeling, with his arms outstretched toward Trajan, who, again, sits high upon a platform.

A final type worthy of mention shows Trajan standing in the midst of three seated or reclining figures that represent the nation of Armenia and the Mesopotamian rivers Tigris and Euphrates.