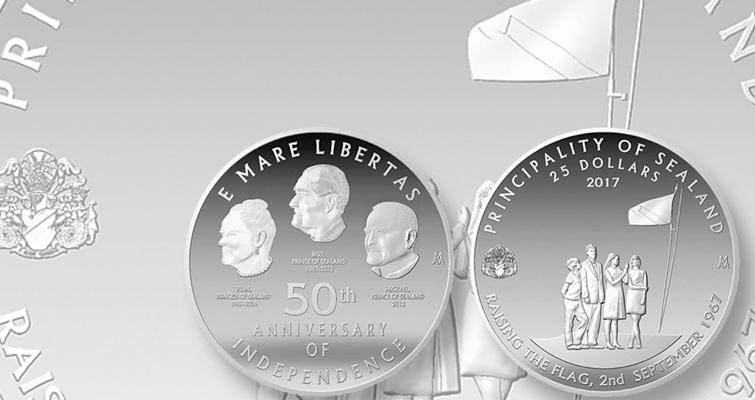 The obverse of the 2017 50th anniversary coin for Sealand shows detailed portraits of all three sovereign princes and princesses since independence was declared in 1967, while the coin’s reverse depicts the first time Sealand’s flag was raised.

A small manmade fort located six miles off the eastern shores of Britain is celebrating its 50th anniversary of becoming a sovereign principality with a Proof $25 commemorative coin.

Sealand, famous for the interesting question of its often debated statehood, was proclaimed, by its owner, to be a sovereign principality Sept. 2, 1967, when Roy Bates, a major in the British army, raised the new Sealand flag on the 10,000-square-foot World War II era radar platform, Roughs Tower, alongside his family and friends.

The silver coin, designed by Michael Alexander, was minted by the United Kingdom’s Tower Mint on behalf of the Treasury of the Principality of Sealand. The reverse depicts that first raising of Sealand’s flag and is based on an original photograph of the event.

The coin’s obverse includes three portraits of the sovereign princes and princess since independence: Prince Roy Bates, who ruled from 1967 until his death in 2012; Princess Joan Bates (Roy’s wife), co-ruler from 1967 until her passing in 2016; and Prince Michael Bates who succeeded his father in October 2012 and his mother in March 2016. Prince Michael is Sealand’s sole “ruler” and this is the first coin issued to include his effigy. Sealand’s official motto E MARE LIBERTAS (meaning “from the sea, freedom”) is placed above the portraits.

The Proof .925 fine silver coin weighs 28 grams, measures 38.6 millimeters in diameter and has a mintage limit of 300 pieces. The coin can be ordered now from the Principality of Sealand’s website for $74.99.

The coin comes in a gold-colored leatherette case imprinted with Sealand’s commemorative dates and crest on top. The anniversary coins are individually numbered from 001 to 300 and hallmarked on their reeded edge. A numbered certificate of authenticity is also included.

While some legal experts today say it’s nothing more than a rusting platform, the Bates family holds firm its statehood.

Sealand’s storied history began during World War II, when the British government built several forts in the North Sea to defend the coast. Some of those structures were built illegally in international waters — distances outside of the United Kingdom’s jurisdiction. Fort Roughs Tower, which later became known as Sealand, was one of them.

While most of the forts were later destroyed, Fort Roughs Tower was simply abandoned. Bates became interested in the tower as a place to operate his radio station in order to get around BBC broadcasting rules. According to Sealand’s website, Bates “proceeded to occupy Roughs Tower, on Christmas Eve 1966, with the intention of revitalizing his dormant radio station. This was until he conjured a different plan entirely. After consulting his lawyers, Roy decided to declare this fortress island the independent state of ‘Sealand.’ ”

A 1968 British court decision upheld Sealand’s independence when the judge stated the tower does not fall under U.K. jurisdiction.