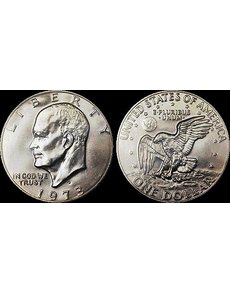 The rarest Eisenhower dollars continue to attract the attention of moneyed collectors as evidenced by the increasingly high prices being achieved at auction for the exceptional examples.

“Normal” Proof 1971-S Eisenhower silver-copper clad dollars in this grade are worth around $20. As Heritage describes it, the rarer Type One reverse has more intricate details on the eagle’s feathers and more clearly defined islands in the Caribbean Sea on the reverse’s depiction of Earth.

An especially interesting point about the offered coin is that it featured special packaging, a cardboard “Brown Box” that bears a golden plastic replica of the Seal of the President of the United States and the embossed facsimile signature “Richard Nixon” below. One story surrounding these coins — of which only a few have surfaced — is that they were distributed at a special presentation ceremony where President Nixon was in attendance.

Several collectors must have agreed with the cataloger’s statement, “This intriguing Eisenhower dollar offers an exciting opportunity for the vanguard collector of the series.”

As grading service population reports mature, and as more people submit modern-era coins like Eisenhower dollars for third-party certification, the true rarity of many issues in top-grades is becoming clear.

For comparison, a 1973-D dollar graded MS-66 with a green Certified Acceptance Corp. sticker realized $499.38 in Long Beach. PCGS has graded nearly 300 examples of this issue in MS-66.