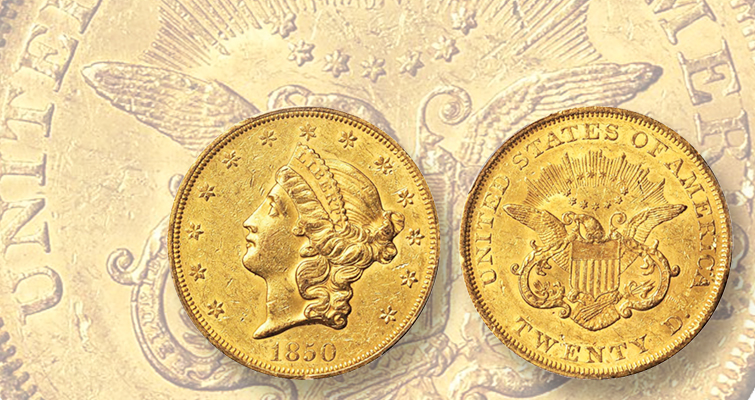 An 1850 Coronet double eagle graded AU-55 starts Stack’s Bowers Galleries’ offering of the Fairmont Collection on June 21 and is a lustrous representative of the first regular issue of the denomination. 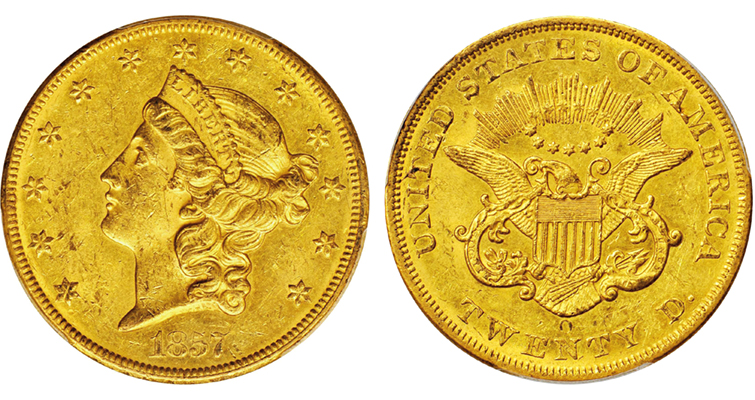 One of just three 1857-O Coronet double eagles graded Mint State at PCGS, this MS-60 example features a stronger than average Mint mark on the reverse. 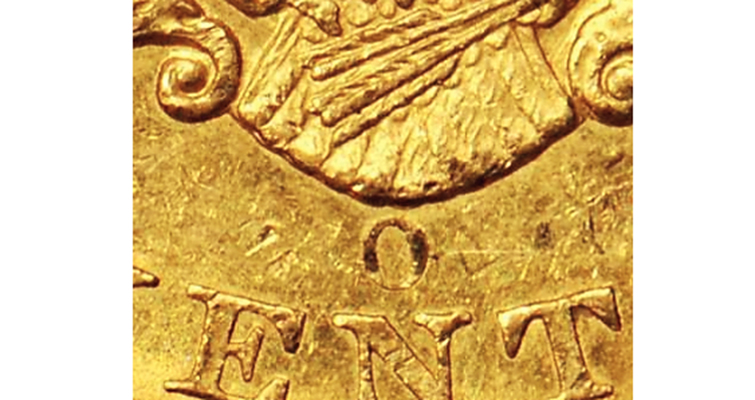 A stronger than average Mint Mark appears on this 1857-O Coronet double eagle struck at the New Orleans Mint. 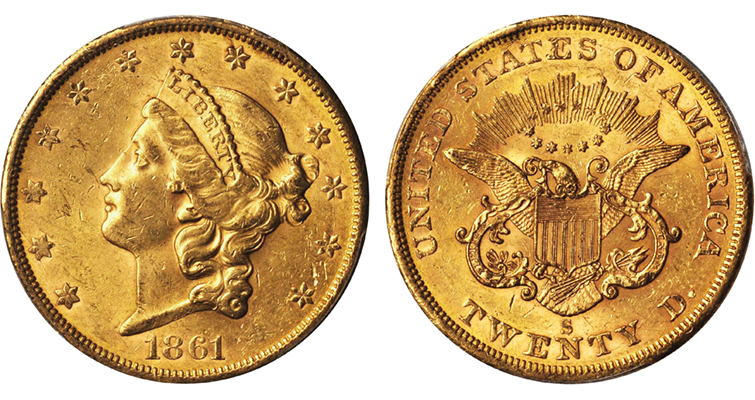 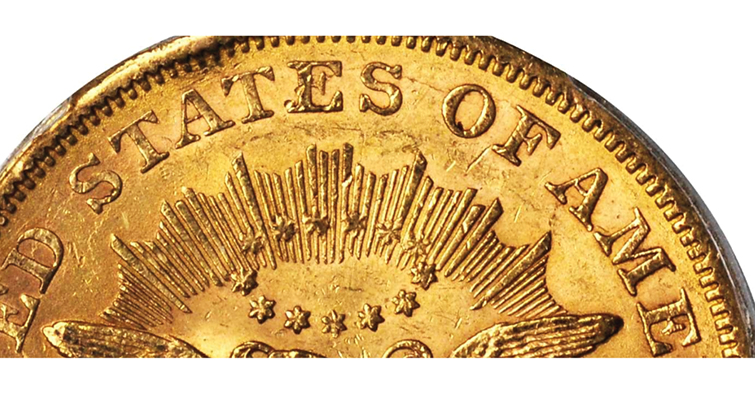 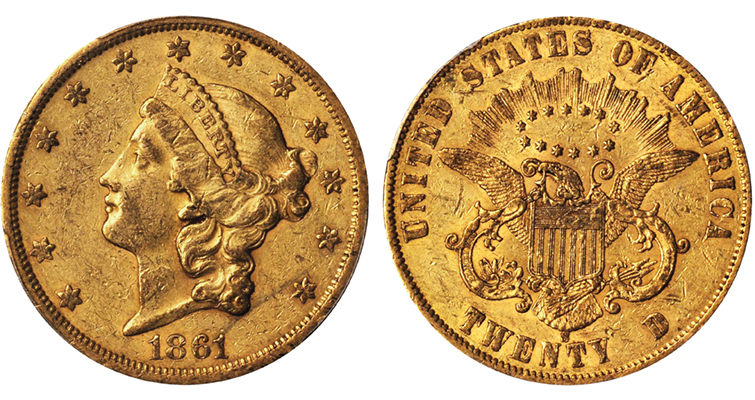 This much rarer 1861-S double eagle with the reverse by Assistant Mint Engrave Anthony Paquet grades About Uncirculated 53 with a green CAC sticker. 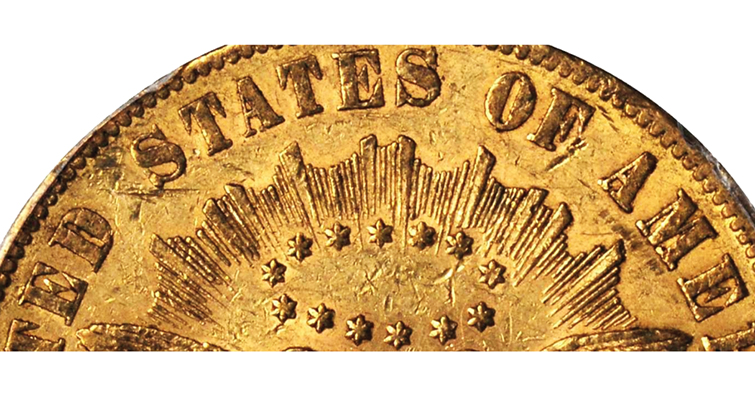 Note the elongated letters on the Paquet Reverse coin, especially on the word OF, and the difference in the intersection of the rays and the stars.

A leading collection of Coronet gold $20 double eagles will anchor Stack’s Bowers Galleries’ upcoming June 21 to 26 auctions as official auctioneer of the Whitman Coin and Collectibles Expo in Baltimore. The Baltimore Summer Expo is set for June 21 to 24 at the Baltimore Convention Center.

The Fairmont Collection is currently ranked as the second finest Professional Coin Grading Service Registry Set of “Liberty Head $20 Gold with Major Varieties, Circulation Strikes (1850 to 1907),” and is a nearly complete set. The first coin in the set that will be offered during the June 21 evening session is an 1850 double eagle graded PCGS About Uncirculated 55. It represents the first year that the denomination, authorized by the Act of March 3, 1849, was issued for circulation.

Most of the Philadelphia Mint’s production of 1,170,261 1850 double eagles circulated in the United States rather than being shipped abroad, and the typical survivor is well circulated. As Stack’s Bowers noted, “These pieces created a sensation when first released. The gold dollar of the same design, released in 1849, was a reality, and the double eagle was eagerly anticipated,” yet few were saved at the time, and today perhaps 30 to 50 are known in Mint State.

This condition rarity places added pressure on choice AU examples, and even those found in major shipwrecks like the SS Republic and the SS Central America are nearly always found with evidence of circulation.

Double eagle production at the New Orleans Mint in 1850 was limited to just 141,000 examples. The auction catalog states, “As with the Philadelphia Mint’s issue of 1850, the 1850-O saw extensive use in domestic circulation, primarily in regions west of the Mississippi River where gold coins were a preferred medium of exchange.” The offered 1850-O Coronet double eagle grades PCGS AU-55.

The mid-1850s saw some legendary rarities in the series struck at the New Orleans Mint, and the collection includes an 1857-O Coronet double eagle graded PCGS MS-60, making it the third-finest graded at PCGS (with the finest being an MS-63 that last sold in 2000 for $97,750.)

Fewer than 200 1857-O double eagles survive from an original mintage of 30,000, and unlike the typical “O Mint” double eagle from the period, the strike on the Fairmont coin is reasonably bold. The cataloger observed, “Light khaki-gold patina blankets both sides, the surfaces revealing brighter golden yellow color as the coin dips into a light. Direct viewing angles also call forth ample evidence of a prooflike finish, reflective tendencies most pronounced in the protected areas around the devices,” before concluding, “this piece is expertly produced by early New Orleans Mint standards.” The Mint mark, while showing some weakness in definition at the bottom, is bolder than typically seen on this issue.

Mint State survivors trade infrequently, with the most recent auction offering being one graded MS-62 by Numismatic Guaranty Corp. with a green Certified Acceptance Corp. sticker that realized $172,500 at Heritage’s January 2011 Florida United Numismatists sale. Heritage explained the 1857-O issue’s rarity in its 2011 catalog entry, writing, “The high intrinsic value of the coins mitigated against holding a large number of pieces for an extended period of time, and there was no widespread interest in mintmarked varieties of any denomination.”

Two distinct types of double eagles were produced at the Philadelphia and San Francisco Mints in 1861: one with the traditional reverse by James B. Longacre that was first used for circulation in 1850 and a second reverse type by Anthony C. Paquet.

The collection offers 1861-S Coronet double eagles of both types. The example representing the usual Longacre reverse grades PCGS MS-61. While the coin is more common than the Paquet version, even the more common reverse is a condition rarity in Uncirculated grades, especially above Mint State 61.

The Paquet reverse double eagle is a famed 19th century rarity and the Fairmont Collection’s representative grades PCGS AU-53 with a green Certified Acceptance Corp. sticker, making it one of the finer examples known.

The description explains its eye appeal, writing, “Awash in rich honey-gold patina, the surfaces are undeniably original, and rare as such in a survivor of this elusive issue. Pale rose highlights flash into view as the surfaces dip into a light, as do ample remnants of a satiny mint finish. Boldly to sharply defined throughout with a remarkably smooth appearance for the assigned grade, this is certainly one of the finest examples of the issue that we have ever handled.”

Paquet arrived in the United States from Germany in 1848 and started contract work at the Philadelphia Mint in 1857. He was soon hired as an assistant engraver, a position he held until 1864 when he left the Mint to focus on his private business.

His distinguished letters are more elongated than on the Longacre design, with a thin space between the thicker uprights of the letters, a style inspired by contemporary newspaper fonts.

Stacks Bowers’ describes the differences between the two reverse types, writing, “The most readily apparent diagnostic between the Paquet reverse and the regular Longacre reverse may be found with the letter O in OF. The Paquet logotype has an extremely thin space between the uprights on the letter, while Longacre’s is significantly wider and much more of a circle. Another defining indicator is how the central halo of stars above the eagle interacts with the rays; they are separate on the Paquet reverse but are nestled in with the rays on the Longacre reverse dies.”

Paquet prepared four reverse dies with his “improvements.” However, production of the coins with the Paquet reverse at the Philadelphia Mint came to a stop on Jan. 5, 1861. Mint officials feared that the narrowed rim on the reverse, absent a corresponding change to the obverse design, would lead to uneven wear on the coin. Virtually all of the Philadelphia Mint Paquet Reverse double eagles were melted and today just two are known.

Given the problems with Paquet’s design and absent any documented need to change the design, these Paquet reverse issues have been considered by some to be patterns, but they were clearly struck for circulation.

The New Orleans Mint did not strike any double eagles with the Paquet reverse, but the San Francisco Mint, thousands of miles west of Philadelphia, did not receive the directive to halt production in time. A total of 19,250 1861-S Coronet, Paquet Reverse double eagles were struck, and fewer than 300 are estimated to remain today. Most survive in well-worn condition with the typical grade being Very Fine to Extremely Fine. The issue was not widely publicized until the 1950s and many of the known examples have come mixed in with European bank hoards. 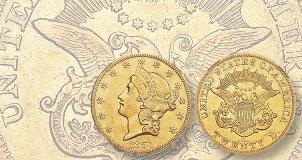 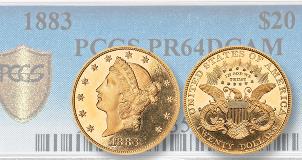 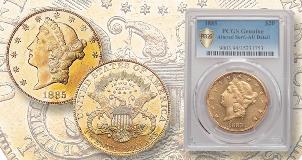