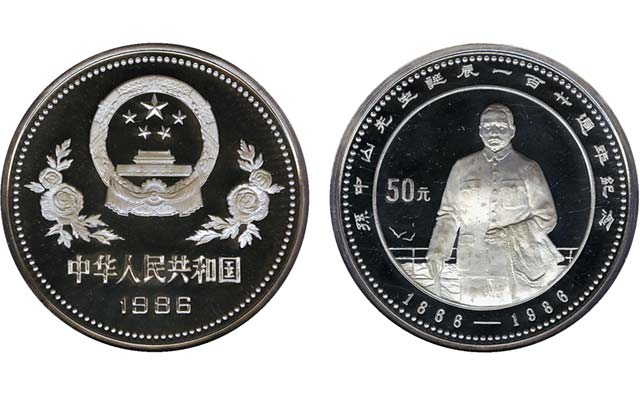 Tied with coins from two other nations as the world’s first 5-ounce silver coin, only 3,000 of these Chinese 1986 50-yuan coins were minted. Sadly, pristine examples are rare due to vinyl packaging PVC contamination. 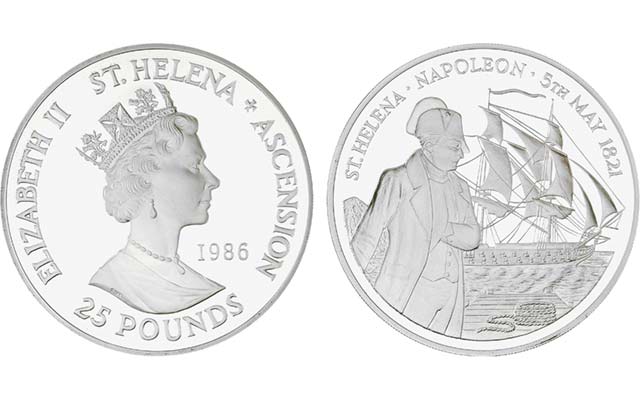 One of the three first 5-ounce silver coins issued in 1986, this £25 coin from St. Helena and Ascension Island commemorates that nation’s Napoleonic connection. In total, 15,000 were minted by the Royal Mint. 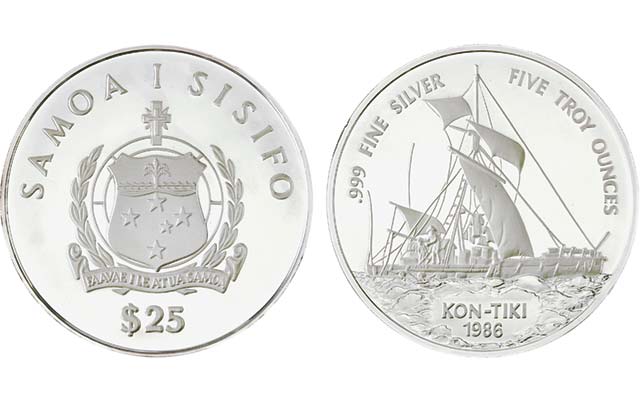 Only 25,000 of the 1986 silver $25 coins of Western Samoa were minted but that mintage is the highest among the three first 5-ounce silver legal tender coins made. Manufactured at the Singapore Mint, it honors the 1947 Kon Tiki Expedition.

This is the fourth part of a feature by Rita Laws exploring the growth in popularity in 5-ounce silver coins during the past four decades.

After years of medals and coins struck in silver sizes approaching the 5-ounce size, 1986 was the monumental year for the first 5-ounce coin to debut, and three nations issued coins of this size that year.

The success of large silver medals, bullion coins and the huge Panamanian 20-balboa coin created the perfect atmosphere for the emergence of the 5-ounce coin in 1986. That year, three nations simultaneously each issued the “World’s First 5 Ounce Silver Coin”: China, St. Helena and Ascension, and Western Samoa, though the coins’ rarity and availability today varies.

The Chinese Proof .999 fine 5-ounce silver 50-yuan coin, which commemorates the 120th anniversary of the birth of Sun-Yat-Sen, is rare for two reasons. It has a very low mintage of just 3,000 pieces, and pristine examples are very tough to find.

When examples are offered for sale, they are often found with polyvinyl chloride contamination from the original soft vinyl packaging. This green goo that stubbornly clings to metallic surfaces is the likely explanation for the gamut of prices this coin lists for, from several hundred dollars to over $1,000.

The St. Helena and Ascension Proof 1986 £25 coin is made from .999 fine silver. The weight, fineness and size are listed on the certificate of authenticity, but not on the coin. The coin’s reverse shows Napoleon gazing out to sea at the HMS Northumberland, the ship that took him to exile on St. Helena Island. He resided on this remote island from 1815 to 1821. This coin is scarce because only 15,000 were minted by the Royal Mint in the United Kingdom.

A bit of controversy attends this coin. The certificate of authenticity claims the weight as 155.5 grams, or exactly 5 ounces, but the Standard Catalog of World Coins by Chester Krause and Clifford Mishler gives it a weight of 155 grams or 4.9839 troy ounces.

And the third nation in the three-way tie for world’s first 5-ounce coin is from Western Samoa (now called Samoa). Like the other two, its coin is a Proof .999 fine silver issue. Created by the Singapore Mint for Samoa, the mintage for this $25 coin is 25,000 pieces. This is more than the other two coins put together and makes this coin pretty easy to find.

The theme is the Kon Tiki Expedition, a trans-Pacific journey from Peru to French Polynesia that Thor Heyerdahl undertook in 1947. He was hoping to give credence to the theory that Polynesians had early American origins. DNA studies concluded in 2011 that Heyerdahl’s theory may have been correct.