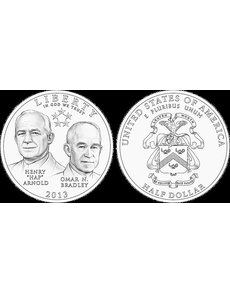 Gens. Henry “Hap” Arnold, left, and Omar N. Bradley, right, are depicted on the obverse of the 2013 5-Star Generals copper-nickel clad half dollar. 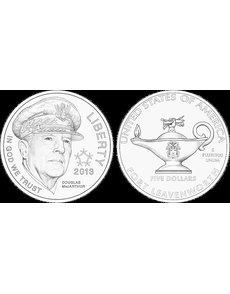 Gen. Douglas MacArthur, a distinguished soldier, scholar and strategist who gave 61 years of service to his country, is depicted on the obverse of the 2013 5-Star Generals gold $5 half eagle. 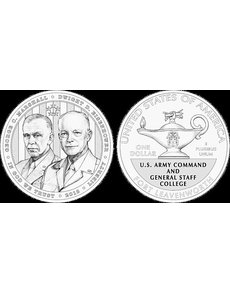 A gold $5 half eagle, silver dollar and copper-nickel clad half dollar will be issued in 2013 in the program.

The enabling legislation did not specify which generals would appear on which coins in the program. That decision was made by U.S. Mint officials.

Wolin selected the designs after consultation with the foundation and the Commission of Fine Arts, and after the designs were reviewed by the Citizens Coinage Advisory Committee.

The obverse of the gold coin features a portrait of Gen. MacArthur with the five-star insignia on the right side of the design. The design, created by United States Mint Artistic Infusion Program Associate Designer Ronald D. Sanders, will be sculptured by U.S. Mint Medallic Sculptor Michael Gaudioso.

The approved obverse had been recommended by the CFA at its June 21 meeting. The CCAC, at its June 26 meeting, recommended a different obverse, showing MacArthur facing slightly to his right instead of left, and wearing glasses.

The Command and General Staff College Foundation had recommended a portrait of MacArthur in World War II from a chest-high view for the obverse.

The approved reverse design was not the choice of either the CCAC or the CFA.

The CCAC recommended a design similar to the approved reverse, with the panel’s choice showing three five-pointed stars in an arc above the lamp and single stars to either side of the lamp’s base (no stars appear on the selected design).

The CCAC’s reverse choice had been designed as a contender for the half dollar.

CCAC members had recommended that the designs for all three coins be more directly linked to the CGSC.

Portraits of Gens. Marshall and Eisenhower against a striped background with the five-star insignia above their heads will appear on the obverse of the silver dollar.

The CCAC recommended the design approved for the obverse. The CFA had recommended a similar design, sans the striped background and with a slightly different placement of the portraits, which were more closely cropped.

The coin’s reverse design features the Leavenworth Lamp and an inscription referencing the college below. Fox designed the reverse, with Menna assigned to sculpture the design.

Both the CFA and CCAC recommended completely different reverses from the one chosen for the coin.

The CFA recommended a silver dollar reverse design taken from the World War II Victory Medal showing the allegorical figure Nike standing victorious with a broken sword in her hand.

The CCAC recommended a reverse design depicting an eagle with a shield that had been originally submitted as a half dollar reverse.

The copper-nickel clad half dollar obverse and reverse designs were both created by U.S. Mint Medallic Sculptor Phebe Hemphill, who will also sculpture her own designs.

The half dollar obverse design selected features the portraits of Gens. Arnold and Bradley with the five-star insignia above their heads.

The CFA recommended the same obverse design. The CCAC made no recommendation for the half dollar obverse.

Both the CFA and CCAC recommended the same reverse design as the one adopted.

The foundation’s choice for the half dollar reverse design was the design eventually adopted for the reverse of the silver dollar.

The designer’s initials of both the artist and member of the Mint’s engraving staff assigned to sculpture each design will appear on each side of each of the three commemorative coins.

The 5-Star Generals Commemorative Coin Act became Public Law 111-262 when the bill was signed into law Oct. 8, 2010, by President Obama.

The United States Mint expects the coins to be available for purchase early in 2013.

The 2013 release of the three coins coincides with the celebration of the 132nd anniversary of the founding of the United States Army Command and General Staff College in Leavenworth, Kan. The honored generals either attended or taught at the college.

The enabling legislation authorizes production and issuance of up to 100,000 $5 gold coins, 500,000 silver dollars and 750,000 copper-nickel clad half dollars combined in Proof and Uncirculated versions.

Customer demand will determine the ratio of Proof to Uncirculated coins produced within the authorized mintage limits.

The U.S. Mint is still in the process of determining which of its production facilities will strike which coins for the 2013 Five-Star Generals Commemorative Coin Program, according to Mint spokesperson Carolyn Fields.

The coins in the program will carry surcharges to be distributed to the beneficiary organization, after the U.S. Mint has recouped its combined production costs.

In the 5-Star Generals program, the purchase price of each gold coin will carry a $35 surcharge; each silver dollar, a $10 surcharge; and each copper-nickel clad half dollar, a $5 surcharge.