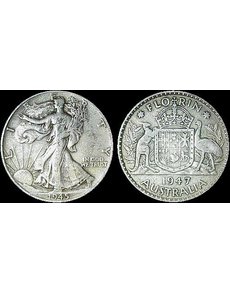 Rolls of Kennedy half dollars also yielded some unusual coins. The 1945 Walking Liberty half dollar shown at left was among the coins found. Three Australian florins showed up in rolls as well, including the piece illustrated at the right.

I would have to say that, for the past month or so, finding half dollars to search through has been particularly difficult.

While I am normally able to have three full boxes of machine-wrapped half dollars delivered to my bank each week, I was able to obtain and examine only one $500 box during the past weeks.

I am still happy to report that I was able to find some really fun coins hidden within that one lonely box of coins.

Three of the coins took me completely by surprise — Australian florins — since they should not have been mixed in with the United States half dollar coins being wrapped in the first place.

Despite the size difference between half dollars and florins, two Australian florins dated 1946 and one dated 1947 made appearances as I searched through the rolls.

The Australian florin was first minted in 1910 and struck to the same size and weight as the United Kingdom florin. Those minted from 1910 to 1945 were produced with a .925 fine silver content, weighing 11.31 grams with a silver weight of .3363 troy ounce.

Florins minted between 1946 and 1963 were produced with a .500 fine silver content, weighing 11.31 grams with an actual silver weight of .1818 troy ounce. Florins were not produced every year so some gaps appear in the dates.

The obverse of the coins depicts an image of King George VI, encircled by the inscription, GEORGIVS VI D : G : BR : OMN : REX F : D : IND : IMP. The abbreviated Latin inscription translates to “George VI, By the Grace of God, King of all Britain, Defender of the Faith, and Emperor of India.”

The reverse of these coins depicts one of two different variants of the Australian coat of arms.

I also found a 1945 Walking Liberty half dollar.

All in all, that box of half dollars yielded some great finds!