Thousands of world coins and ancients at auction 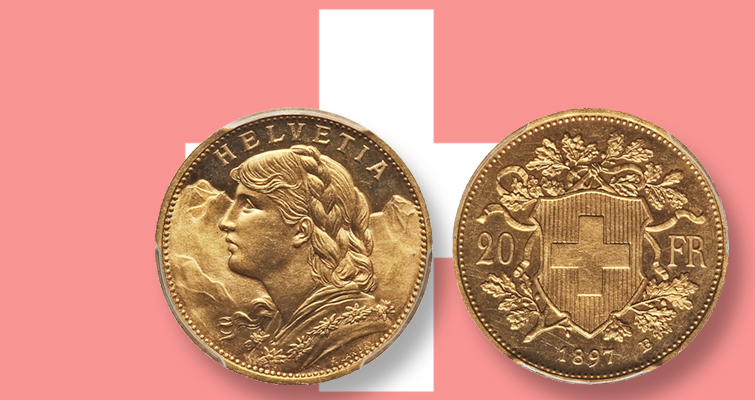 A tiny of wisp of hair on this 1897-B gold 20-franc coin from Switzerland was deem­ed frivolous and the design was not adopted, so all coins with this design are rare. 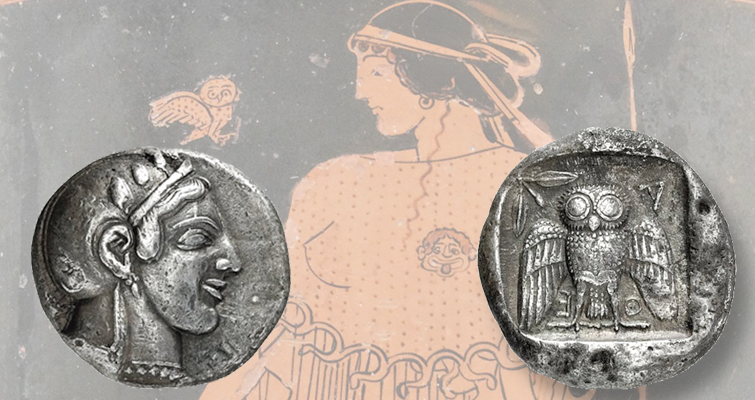 Silver decadrachms from Athens are rare and coveted. The circa 469 or 465 to 460 B.C. coin is of the largest silver coin type of ancient Greece. 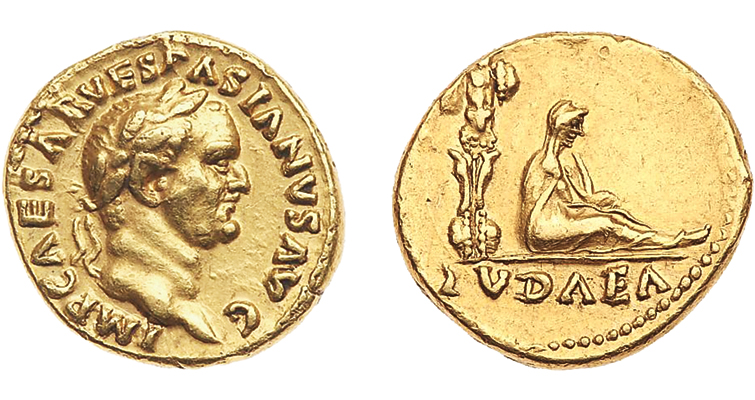 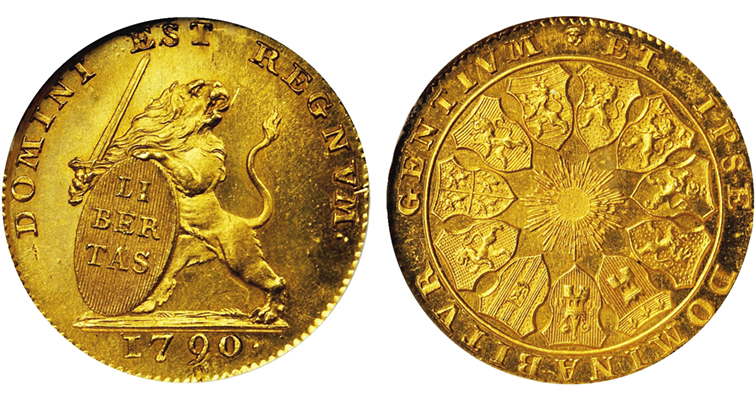 The Brabant Revolution only lasted 14 months, but produced this golden lion d’or coin struck in Brussels in 1790, several decades before Belgium achieved independence. 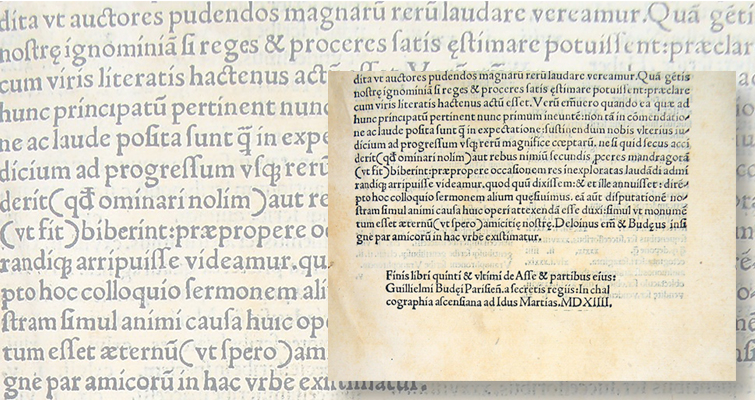 The first ever numismatic book highlights the Kolbe & Fanning numismatic auction at the NYINC. 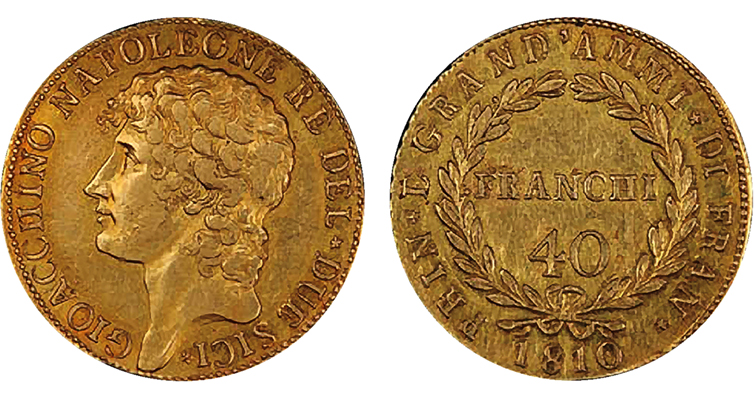 An 1810 gold 40-franchi coin is a rare remnant of Napoleon’s efforts to create a common European currency.

Thousands of lots are slated to cross the auction block during nine days of auctions in early to mid-January during the New York International Numismatic Convention.

The bourse will features thousands of numismatic items for sale and viewing, and the auction action draws buyers from around the globe and keeps them in the auction hall, sometimes into the early morning hours, to capture rarities that span centuries and the world.

Coin World highlights here a handful of notable items to be offered during the marathon of sales in the Big Apple, in order according to the time of their sale.

Leading the barrage is the Heritage Auctions World Coins sale Jan. 8 and 9.

An iconic gold pattern issue of Switzerland is among the marquee lots in this sale.

The 1897-B 20-franc specimen striking, also called the “Stirnlocke-Vreneli” pattern, was never adopted, and its “alarmingly low” mintage of 12 pieces explains its position as an ultimate rarity in the Swiss series, according to Heritage

The obverse depicts a subtly different image of Helvetia than normally seen on the Swiss coinage. A garland of edelweiss appears over her shoulder and the Swiss Alps are in the background. The distinguishing element on the design, however, is her hair, in a design that was deemed too frivolous, according to the auction house. The “stirnlocke,” the enchanting lock of hair blown gently by the mountain breeze across her forehead, was an element designed and engraved by Fritz Landry. The wisp was removed from the version of the design struck for circulation, and few examples of the pattern were made or remain today.

The example offered by Heritage is graded Specimen-66 by Professional Coin Grading Service and has a pre-sale estimate of $100,000 to $150,000.

Classical Numismatic Group’s Triton sale always has an abun­dance of items for ancient and world coin collectors, and one of its highlights is a coin with a legendary design and phenomenal story of origin.

The Jan. 10 and 11 Triton XX auction stars a silver decadrachm of Athens, in Attica. The circa 469 or 465 to 460 B.C. coin is of the largest silver coin type of ancient Greece, and was likely issued for celebratory reasons.

Scholars have disagreed on the exact cause of issue for the coins, but their appearance at auction is always notable. As the “deca” part of the denomination’s name suggests, the coins are worth 10 drachms; similarly designed smaller coins, with lesser values, are also known.

The decadrachm (or “dekadra­chm” as it is also spelled) in the CNG auction measures 34 millimeters and weighs 42.78 grams, which former Coin World writer Andrew Perala once quipped was about on par with an Oreo cookie.

“The historical context of the Athenian dekadrachms, as well as concomitant tetradrachms and didrachms of the same class, has been the matter of extended debate,” according to Classical Numismatic Group.

“It seems clear that such an exceptional and compact issue must have served some special function,” the auction firm reports. “Recent scholars have focused on two key historical events during this period that could have produced sizable quantities of silver for this series.”

One of the possible celebratory occasions was a victory during the battle of the Eurymedon River in 467 B.C., where the resulting captured Persian booty was enormous and was attested to have been distributed. The capture of Thasos and its mines in 463/2 B.C., where the plunder is assumed to have been substantial, is also a possible event spurring release of the coin.

Whatever the cause, the coins always draw attention, the head of Athena on the obverse a play on the town of issue and the owl on the reverse a famous symbol of the city-state.

The example in the CNG auction is in Good Very Fine condition with “impressive high relief,” the firm said, and has an estimate of $300,000.

The ancient Jews never struck a gold coin, but the nation of Judaea was referred to on gold (as well as silver and bronze) coins issued by the Romans following the defeat of Judaea and the destruction of the temple in 70 A.D.

An example of this issue, a gold Judaea Capta aureus, highlights The New York Sale’s auction of the Brody Collection of Judean Coins.

The collection, “one of the most extensive collections of extraordinary high quality ancient Jewish coins,” was assembled by a Long Island doctor over two decades

The New York Sale consortium offers the collection at auction on Jan. 10. The consortium consists of Ira & Larry Goldberg Coins and Collectibles, A.H. Baldwin & Sons Ltd., Dmitry Markov, and M & M Numismatics. Their auctions are scheduled for Jan. 10 to 12. .

This Judaea Capta type coin features a bold IVDAEA inscription beneath a seated female figure in an attitude of mourning, opposite an obverse portrait of the Emperor Vespasian, who also led the Roman troops against the Judaean freedom fighters. It is expected to be hammered down for more than $60,000.

The Stacks’ Bowers Galleries Jan. 13 and 14 auction includes a relic from the Belgian struggle for independence.

The gold lion d’or (14 florins) coin from 1790 was struck at the Brussels Mint, an insurrection issue marking the fleeting 14-month Brabant Revolution (October 1789 to December 1790).

This revolt took inspiration from the Liege and French Revolutions. After defeating Austria at the Battle of Turnhout in January of 1790, the “United Belgian States” was established and produced this coin. This Austrian-Netherlands area saw a brief period of independence, before being annexed by Napoleonic France.

The coin depicts a rampant lion roaring defiantly while holding a sword and shield. The coats of arms from the 11 rebellious provinces are arrayed around a sun burst.

Only 3,805 examples of the coin were struck for the short-lived country, and few examples survive.

The auction offers the single finest certified example, graded Mint State 65 by Numismatic Guaranty Corp. The coin has an estimate of $12,000.

The New York show has for the past five years or so played host to a different kind of auction that doesn’t offer coins. Kolbe & Fanning Numismatic Booksellers take a Saturday auction slot with numismatic literature.

What’s more appropriate to highlight than a first edition of the first numismatic book ever made?

De Asse Et Partibus Eius Libri Quin(que) Guillielmi Budei Parisiensis Secretarii Regii, published in March 1514 in Paris, is considered not only the first printed numismatic book, but one of the most important philological treatises of 16th century French humanism, according to Kolbe & Fanning.

The book focuses on metrology, specifically the weights and purchasing power of ancient coins. Knowing this information would help interpret ancient writings, author Guilliaume Bude believed. His scholarship became widely acknowledged for its scope and depth, and for the writer’s grasp of Latin.

The book’s condition is affected by some pages that were trimmed, and some areas of wear, but on the whole is well preserved, with some areas of discoloration or browning.

Graded Very Good by the auction house, the book has an estimate of $5,000.

Napoleon’s victories (and spectacular losses and exile) have been studied for two centuries, but a curious story from his life is his effort to create the first monetary standard in Europe.

The coin was struck for Naples and Sicily in Italy, and depicts a Napoleonic relative, Joachim Murat.

The 40-franchi coins were presentation pieces and trial experiments prior to the May 19, 1811, law enacting a decimal monetary system.

Napoleon wanted to create the first European monetary standard, based on a new decimal system (denominated in “francs,” or “franchi”) to be shared throughout his empire. These coins (also referred to as “napoléonides”) depicted portraits of the emperor or of his relatives, such as Jérôme Bonaparte in Westphalia, Joseph Bonaparte in Spain, or Murat in Naples.

Only 18 examples of the type for Italy are known, according to Spink. 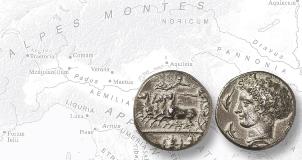 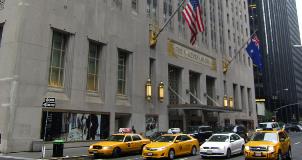 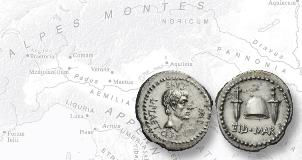