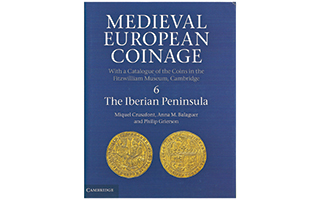 A third volume in an ambitious series on medieval European coinage is now available in the United States.

The new work is the latest volume in Medieval European Coinage, a major reference series embracing European coinage from circa A.D. 450 to A.D. 1500, exploring the coins by region. Every volume catalogs relevant coins in the Fitzwilliam Museum.

Volume 1, which covers Europe during the early Middle Ages (fifth to 10th centuries), was issued in 1987, and Volume 14, exploring coins of South Italy, Sicily, Sardinia from the 10th to 15th centuries, was published in 1998.

The latest volume is the first English-language survey on the coinage of Spain and Portugal from circa 1000 to 1500 for an international audience.

It provides an authoritative up-to-date account of the coinages of Aragon, Catalonia, Castile, Léon, Navarre and Portugal, which have rarely been studied together.

The new volume offers a new syntheses of the monetary history of the individual kingdoms and includes an extensive catalogue of the Aragonese, Castilian, Catalan, Leonese, Navarrese and Portuguese coins in the Fitzwilliam.

The book was published by Cambridge University Press at £150, but Charles Davis distributes the book in the United States. Davis price is $260 plus shipping and handling.

To order from Davis, telephone him at 978-468-2933 or email the bookseller at charlesdavis@vcoins.com.