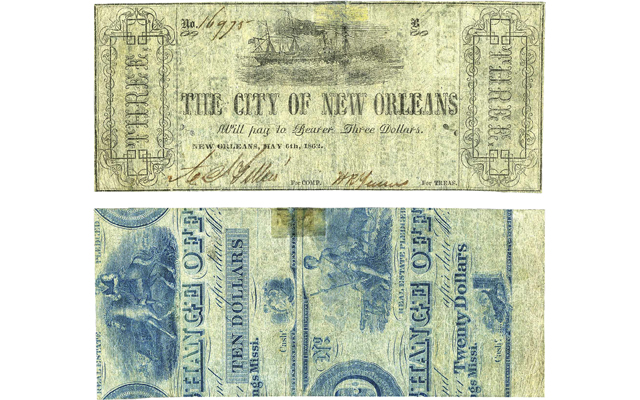 After the theft of new notes for New Orleans, city officials came up with a plan to print notes on the backs of some noncurrent sheets of notes for Holley Springs, Miss. The distinctive blue notes provided the perfect block for thieves who might try to circulate the stolen notes.

Most collectors of obsolete paper money are quite familiar with notes that were printed on the backs of unused or surplus uncut sheets of paper money. The sources of these sheets were usually banks that had failed or closed.

Because a large majority of notes prior to the Civil War were printed on only one side, with no back designs, these sheets made the perfect host for issuers who were not bothered by someone else’s notes appearing on the back of their issues.

This practice was particularly prevalent in the South during the Civil War where the Union naval blockade created all sorts of raw material shortages, including bank note paper. The uncut sheets of noncurrent notes could be bought for their scrap paper value and were better than the alternative — not having any paper to use at all.

As a result, many Southern notes (along with a few from the North) are available printed on this “recycled” paper, with portions of the old note designs appearing on the backs of the newly printed bank notes.

But paper shortages were not the only reasons for doing this. Take, for example, the City of New Orleans in May 1862. The city had just undertaken an issue of notes with which it planned to redeem the scrip issued by hundreds of merchants in the city after coins had disappeared from circulation (this was a common problem in both the North and South by 1862).

Just as the program was beginning, the printer reported that hundreds of sheets of unissued notes had been stolen from his office. The city was now faced with the dilemma of how to quickly replace these stolen notes with something distinctive that would essentially make the stolen notes impossible to put into circulation.

Since the stolen notes had no back designs, the authorities came up with an ingenious solution. They purchased sheets of noncurrent Holley Springs, Miss., notes printed in a bright blue hue and directed the printer to print replacement notes of the original design on the backs of these sheets.

As a result, new notes were quickly put into circulation with a difficult-to-replicate blue back design. Even if the thieves could obtain similar Mississippi sheets, they could not easily reproduce the original face design.