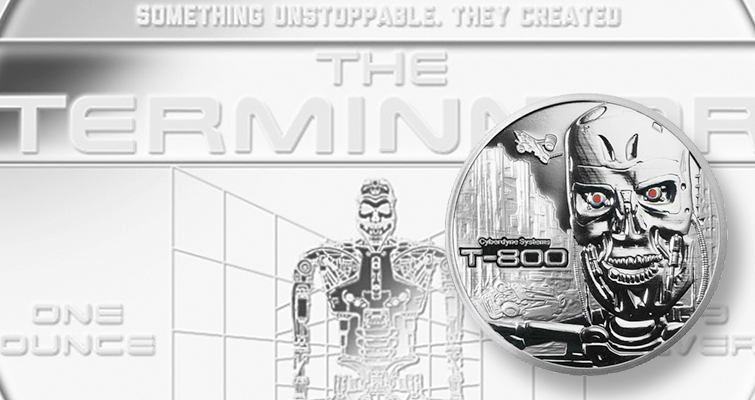 Stardust Silver has released the first in a series of medallions to be issued celebrating The Terminator movie franchise. 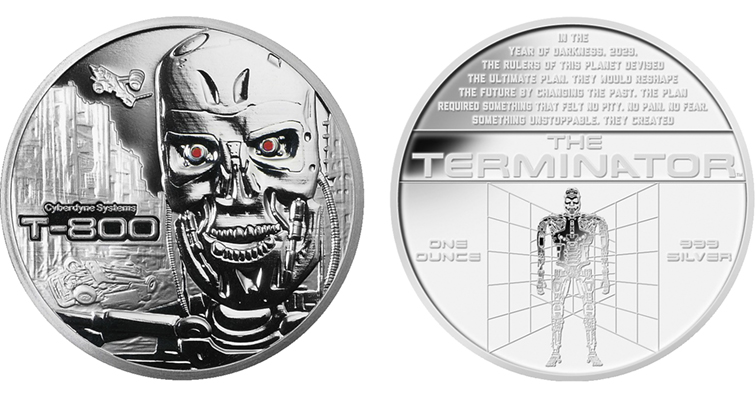 The first medallion is a 1-troy-ounce, .999 fine silver Reverse Proof piece featuring The Terminator's Endoskeleton Skull based on the Cyberdyne Systems Model 101 Series T-800 in the science fiction movie.

LAS VEGAS, Nev. – Thirty-one years ago, The Terminator opened in theaters and rocketed to No. 1 at the box office, as audiences journeyed to the year 2029 then back to the 1980’s in the fight for the survival of the human race.

Celebrating over 30 years on the silver screen, The Terminator is newly released in .999 fine silver. The first in a planned series release from upstart Stardust Silver is the Cyberdyne Systems T-800 1-ounce silver Reverse Proof medallion.

Inscribed on the medallion's reverse is the tagline that launched the movie series: "In the Year of Darkness, 2029, the rulers of this planet devised the ultimate plan. They would reshape the Future by changing the Past. The plan required something that felt no pity. No pain. No fear. Something unstoppable. They created THE TERMINATOR."

Obverse: The Terminator's Endoskeleton Skull is based off the Cyberdyne Systems Model 101 Series T-800 that was sent from in the year 2029 to Los Angeles in 1984 to kill Sarah Connor, the future mother of John Connor, who will one day become a savior against the AI (artificial intelligence) in a post apocalyptic future. Behind the Skull is depicted the carnage that follows in this machine's path.

Reverse: The tagline that launched the franchise is shown at the top, along with a full length image of The Terminator, an efficient killing machine with a powerful metal endoskeleton, as depicted in the original Cyberdyne Systems Model 101 blueprints in the movie. 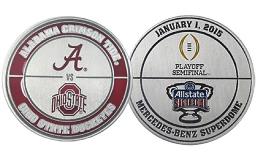 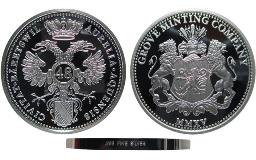