The Sunrise Collection of Islamic Coins 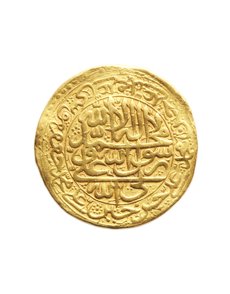 In the Eighth Century AD, while Western Europe was mired in the Dark Ages, Islamic Civilization stormed out of the Arabian Peninsula and swept over the lands formerly held by the Roman and Persian Empires. Millions of new adherents and subjects were introduced to a vibrant culture rooted in veneration of the Prophet Mohammed and the religion he founded. Islamic art, science, and literature brought a brilliant light to a formerly darkened world. Soon after the establishment of the vast medieval Islamic Empire, its dynastic rulers began striking coins that hewed closely to the Koranic and Biblical ban on "graven images", while finding their own unique and beautiful blend of calligraphic art, Islamic religion, and floral aesthetic design.

Painstakingly assembled over a 40 year period, the Sunrise Collection, to be featured in Heritage Auctions’ upcoming 2013 January 6-7 Ancient & World Coin Signature Auction is one of the most comprehensive private collections ever put together tracing the magnificent history of Islam as a world power, with a special focus on two of its most important states — Persia and Mughal India. Comprising nearly 800 coins in gold, silver, and bronze, the Sunrise Collection spans nearly a millennium and a half, from within a few decades after the Hijra (AD 621/AH1), through the end of the Qajar Dynasty (AD 1794-1925/AH 1174-1305). Also included are early Arab-Sassanian coins, important Arabic coins of the Umayyad and Abbasid dynasties (AD 661-1258/AH 41-638), the Seljuq and Ottoman Empires (AD 1071-1923/AH 451-1303), and of neighboring Nepal and Tibet. With an overriding emphasis on quality and rarity, the Sunrise Collection bears testimony to the collector's dedication, outstanding eye, knowledge of history, and love of his heritage.

"The collector began assembling a remarkable collection of Islamic Coins nearly forty years ago, always seeking the finest quality and the greatest rarity," said Stephen Album, author of Checklist of Islamic Coins and prime cataloger for the Sunrise Collection. "As his knowledge and financial position improved, he constantly searched not just for the rarest coins, but the artistically most magnificent. The collector understood that even moderately rare coins of outstanding quality were far more important than mediocre examples."

"The consignor's own Iranian background allowed him to recognize the finest Iranian coins," continued Album, "an ability that spread to Mughal and later Indian coins, whose style was derived from Iranian traditions, and were inscribed in the Persian language. Most of the specimens are of such awesome quality that comparable pieces may never again become available. I have witnessed the collector's ability to sort through a group of many hundreds of coins and select the one or two extraordinary pieces that are the fabulous gems, unlikely ever to be found again. This is not just a large collection — it is a work of art!"