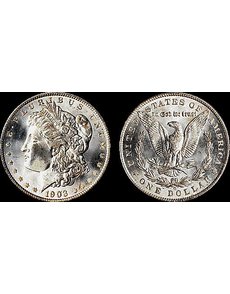 As I write these words I reflect on November 1962, when super-rare Mint State 1903-O Morgan dollars — cataloging for $1,500 in the “Red Book” (A Guide Book of United States Coins by R.S. Yeoman) with none higher — were discovered by the hundreds of thousands! I had never seen such excitement, nor had anyone else. Up to that time I had never seen a Mint State 1903-O Morgan dollar, and few others had either.

The story goes back to 1929 when many bags of old O-Mint dollars were shipped from the New Orleans Mint to the Philadelphia Mint and sealed in a special vault, so they would not have to be counted at regular intervals. In time, the coins were forgotten.

In 1962, the Federal Reserve requested that the Philadelphia Mint ship some “new” dollars out for distribution as holiday gifts. Most on hand were bags of mixed circulated dollars. Then someone thought of the sealed vault. It was opened, and presto! The numismatic market changed forever!

I was front row center in a lot of the action as it developed and enjoyed it immensely. I began a decade of interviewing dealers and others who were participants and recording their experiences to be included in my Silver Dollars and Trade Dollars of the United States: A Complete Encyclopedia, published in two volumes in 1993.

The sparkling nice-as-when-minted 1903-O dollars set off a silver rush all across America.

Banks and Treasury Department holdings were tapped. Eventually, hundreds of millions of long-stored dates and Mint marks came to light — mostly in the Morgan series. I learned that there was only one coin among circulation issues that was not found: the 1895-O dollar. Of all the others, at least some were discovered, including some of the key 1893-S dollar and millions of some others.

Harry J. Forman, of Philadelphia, was the leading dealer in sealed bags of dollars, wholesaling them nationwide. The sealed vault in Philadelphia still contained countless 1,000-coin bags of dollars, and elsewhere in storage in the Mint were innumerable other bags of such coins. Most had no markings as to their contents.

Ever-innovative, Harry came up with the idea of paying vault custodians a tip if they would go into the vaults, smoking cigarettes — which was allowed at the time. They were to press the lighted end against the cloth of a bag, create a hole near the top, shake the bag, and find out the date and Mint within. This worked like a charm, and he got his first pick of scarce and rare varieties, while common coins were ignored.