The 'pegasi' of Italy and Sicily 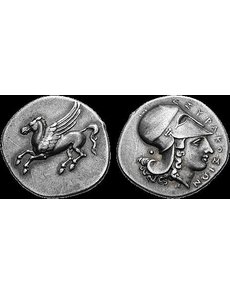 Syracuse was a prolific issuer of pegasi from about 345 to 289 B.C. This piece is among the earliest issues, and is associated with the expedition of the Corinthian general Timoleon. 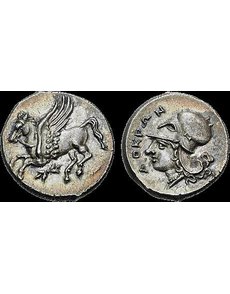 A distinctive style and a clear inscription secure the attribution on this issue of pegasi to Locri in Bruttium. It is usually dated to the period circa 350 to 275 B.C. 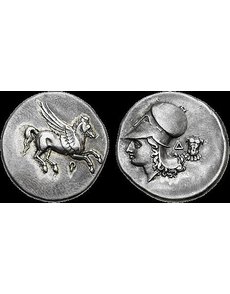 A typical Corinthian stater of the later fourth century B.C., this example has an archaic letter Koppa on its obverse to identify its mint of origin as Corinth. 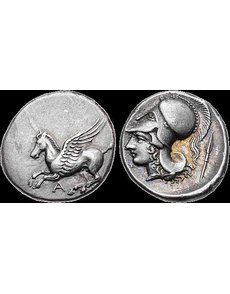 A stater of Ambracia in Epirus of the mid-fourth century B.C. is unusual in that it shows Athena wearing a helmet decorated with a long crest of horse hair.

Silver staters of the Corinthian type, which show on their obverse the mythological winged-horse Pegasus and on their reverse the helmeted head of the goddess Athena, are among the most recognized of ancient coins.

The first coins of this type, often called “pegasi,” were struck at the end of the sixth century B.C. at Corinth, a city strategically located at the junction of mainland and Peloponnesian Greece.

The Corinthians founded many colonies, and these cities often copied the coins of their mother city, helping to assure that pegasi were issued outside of Greece proper. Colonial issues were distinguished from those of Corinth by inscriptions and symbols of local significance. Even some non-Corinthian colonies copied the Pegasus-Athena design in hopes of garnering a commercial advantage.

Italy and Sicily had been aggressively colonized by Greeks since the seventh century B.C. and the area was called Magna Graecia, meaning “greater Greece.” Among the many Greek traditions exported to this region was coinage, as the western pegasi clearly show.

The popularity of pegasi in Magna Graecia partly derived from the fact that no important local sources of silver existed. Much of the metal was imported from Greece in the form of coins. It was fortunate for Corinth and its western colonies that other, major Greek silver coinages — notably tetradrachms of the city of Athens and the Macedonian King Alexander III “the Great” (336 to 323 B.C.) — typically were exported to the East. This seems to have allowed pegasi to become a dominant foreign currency in Magna Graecia.

Not only are large hoards of pegasi found in southern Italy and Sicily, but the coins themselves were used as planchets for some local issues, as is shown by remnants of the Pegasus-Athena designs that sometimes survived the overstriking process. Furthermore, one can only guess how many coins of Magna Graecia were struck using silver garnered from melted pegasi.

Though the main designs of pegasi are remarkably consistent, regardless of the mint, they can be distinguished in many ways. Foremost is an inscription, which indicates the city of issue. Sometimes this is spelled out fully, but more often it is abbreviated with one or more letters, or a monogram composed of letters. Other times coin inscriptions present no conclusive evidence, and one can only make an educated guess as to the mint of origin.

Large numbers of pegasi were struck at cities outside of Corinth, including at several of its colonies along the northwest coast of mainland Greece. The most prolific issuers of pegasi in this region were Dyrrhachium, Leucas, Ambracia, Anactorium, Thyrrheium and Argos Amphilochicum. The fact that many of these cities were only 50 to 80 miles across the Adriatic Sea from the “heel” of Italy assured the popularity of pegasi on the northwest coast of mainland Greece.

Several cities in southern Italy struck their own pegasi. Most issues were small, but a rather large one was produced late in the fourth century B.C. at Locri, a city on the bottom of Italy’s “toe.”

In Sicily, a great number of pegasi were struck. As was the case in the Italian peninsula, a variety of small issues circulated, including ones from the cities of Leontini and Tauromenion. The vast majority were struck at Syracuse, which had been founded by settlers from Corinth in about 734 B.C. As the most successful Corinthian colony in the West, Syracuse enjoyed strong ties with Corinth, which proved useful on several occasions.

Syracusan pegasi seem to have been produced in three distinct phases covering the period circa 345 to 289 B.C. The largest issue was struck in about 341 B.C., when the Corinthian commander Timoleon arrived to help the Syracusans oust the tyrant Dionysus II. The expedition was a complete success, and the associated pegasi must have been used to pay soldiers. These coins are easily identified by the full inscription ΣΥΡΑΚΟΣΙΩΝ (“[coin] of the Syracusans”), which appears before the head of Athena.

This historical event established pegasi as the temporary coinage of choice in Syracuse. About two generations afterward, new pegasi were struck upon the accession of King Agathocles in 317 B.C. At this point the traditional arrangement of obverse and reverse was changed: Agathocles put the head of Athena on the obverse and relegated Pegasus to the reverse.

Most pegasi of Agathocles bear the inscription of the Syracusans and the trisceles symbol, comprised of three legs running in perpetual motion. Not only was the trisceles this king’s personal badge, but it also represented Sicily due to its similarity to the triangular shape of the island. On these issues Athena wears a crested helmet, a design similar to the presentation of this goddess on the gold coinage introduced by Alexander III.

Sometime after 304 B.C., during the reign of Agathocles, the weight standard of Syracusan pegasi was reduced by about 20 percent. These “reduced standard” coins no longer bear the city’s ethnic inscription, and retain only the king’s badge (the trisceles) or carry an entirely different symbol.

A final reduction of Syracusan pegasi occurred under the city’s next king, Hieron II (275 to 215 B.C.), who cut the weight by another 15 percent. Consequently, his coins are no longer considered to be staters, but octobols. These rare coins bear the name of Hieron beneath Pegasus on the reverse.

Though pegasi didn’t have as great an influence west of Sicily, some coins produced in Spain depict Pegasus, including silver coins of Osca and Emporium. Those of Emporium show on their obverse the head of a nymph surrounded by four dolphins, a standard design for Syracusan coins. This suggests the designs were derived from Syracusan coins rather than any other issues of Southern Italy or Greece. ¦