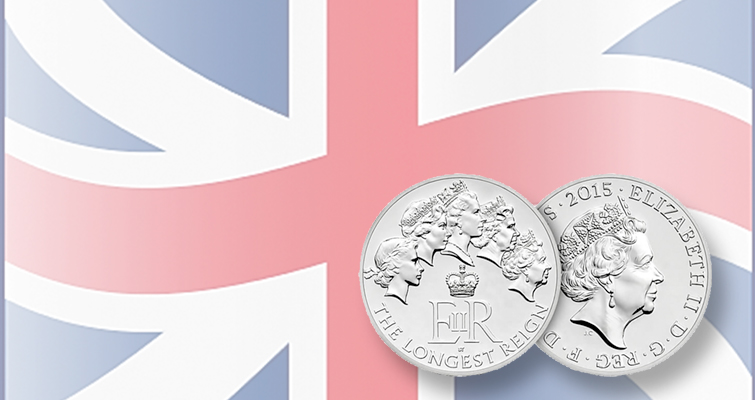 The Royal Mint wants to know what your favorite coin of 2015 is.

Image Courtesy of the Royal Mint and WikiCommons

With Queen Elizabeth II becoming Britain's longest reigning monarch earlier this month, the Royal Mint is eager to see what the people believe to be the best coin of 2015 so far and is taking votes at its website.

As of now, "The Longest Reign" £20, with a reverse designed by Stephen Taylor, leads the way by a significant amount with 37 percent of the vote.

Of the 16 options that have received votes, the top two are both of the "Longest Reigning Monarch" family. The second most popular coin of these two, according to voters, is the "One Crown" £5 coin. The queen's effigy on this particular coin was designed by James Butler, as was the coin's reverse.

The 2015 Winston Churchill £20 coin rounds out the top three for now, with 9 percent of the vote.

Head on over to the Royal Mint's website and cast your vote.

"The 'modern' Liberty design that appears on the U.S. Mint's gold 2015-W American Liberty, High Relief $50 coin has been a hot topic this year."

Jason Kunz, an illustration professor at Brigham Young University in Utah wanted to design an effigy that projected both a "sense of strength but also beauty."

Have a look at the BYU Professor's process and inspiration

4. Well-toned Morgan drives heavy price tag
"An unidentified collector paid nearly $14,000 to acquire in a Sept. 6 online auction a common-date 1879-S Morgan dollar graded PCGS Mint State 65 that carries a published value of $150 to $165."
Read why this common-date Morgan dollar realized so much