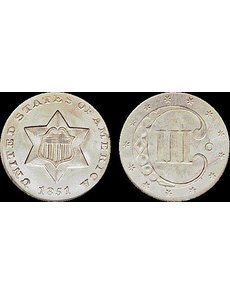 The 1851-O silver 3-cent coin represents the only 19th century United States coin of any denomination below five cents that was struck at a Branch Mint; in this case, the New Orleans Mint.

If you stop to think about it, most numismatists strive for completion and want one of everything. If you are collecting Washington quarter dollars, you will not rest until you have a nice 1932-D coin. You will also need common issues.

At the recent Whitman Coins & Collectibles Exposition in Baltimore, I was at the Stack’s Bowers Galleries/Spectrum bourse booth and spent the best part of two days talking with visitors.

Martin Logies, a connoisseur par excellence, came by and we talked about his Cardinal Collection recently consigned to us. “What are you going to collect next?” I asked. Then followed a discussion. Martin is currently pondering his next specialty.

Talk turned to general aspects of collecting American coins. I came up with the idea of, not just seeking one example of everything, but picking favorite coins with stories. This again is the “I like it” method — the same as collecting antique cars or autographs. Rarity is not at all important!

I contemplated the possibilities. To represent the Lincoln cent, I would pick the famous 1909 Lincoln, V.D.B. cent — a “story coin” if there ever was one. I would not consider the much rarer 1914-D cent, as its only distinction is having a D Mint mark. I could stand on the proverbial soapbox and talk for a half hour about the first coin, one of the most common and least expensive among the earlier issues, but it would be hard to fill five minutes on the second.

For the 1878 to 1921 Morgan dollar, my choice hands down would be the 1903-O dollar, a coin that in November 1962 changed the very structure of American numismatics.

For the very same reason I would pick the 1950-D Jefferson 5-cent coin to represent that series. It, too, changed the marketplace in the 1950s. The 1883 Liberty Head, No CENTS 5-cent coin was responsible for doubling or tripling the number of collectors after it was launched. How interesting!

I collect what I like, not because an item is rare.

You might give some thought to collecting specific coins that you find interesting. Nearly all are inexpensive in comparison to the key issues in the same series.