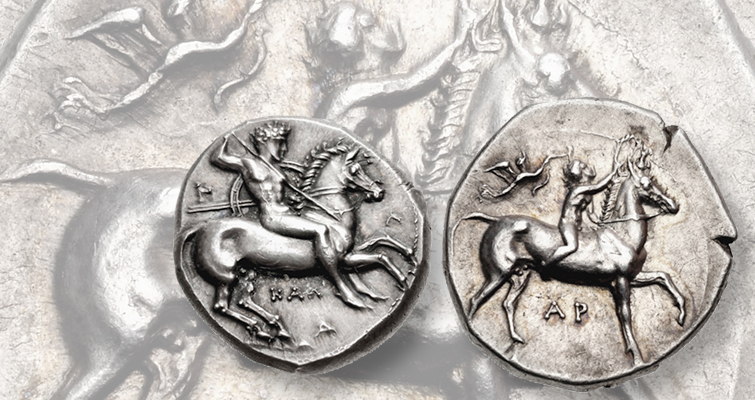 These attractive Greek silver didrachms are attributed to the brief period circa 340 to 330 B.C. 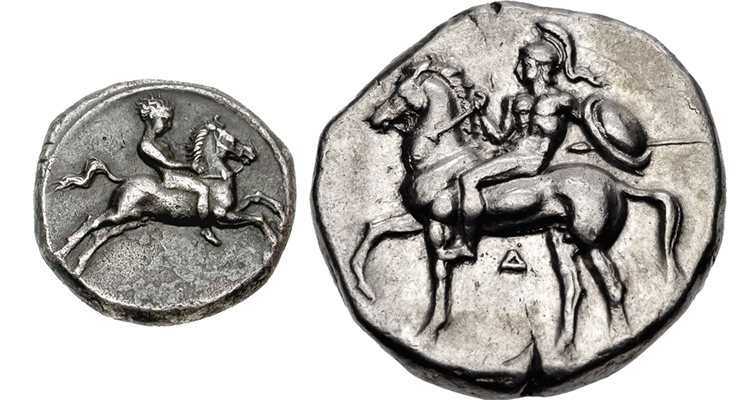 These exquisitely engraved designs appeared on didrachms struck at Taras in the early-to-mid fourth century B.C. 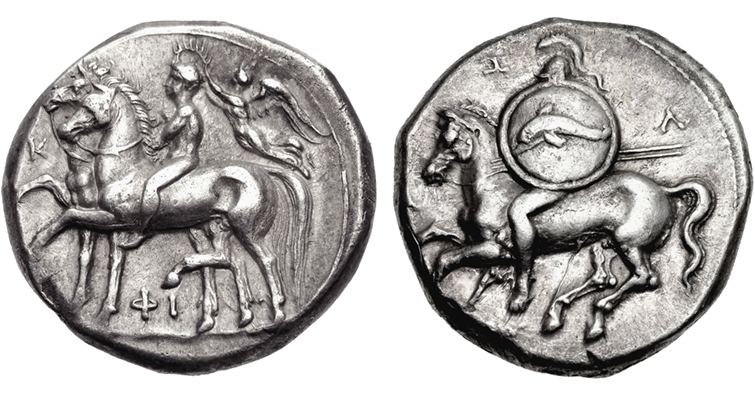 Both of these didrachms likely were struck in the closing decades of the fourth century B.C. 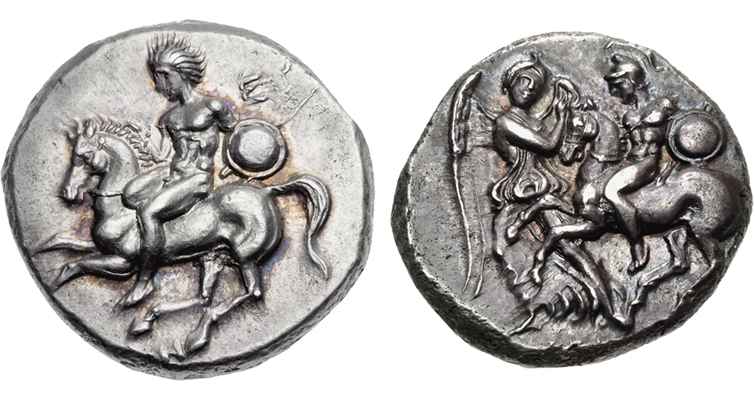 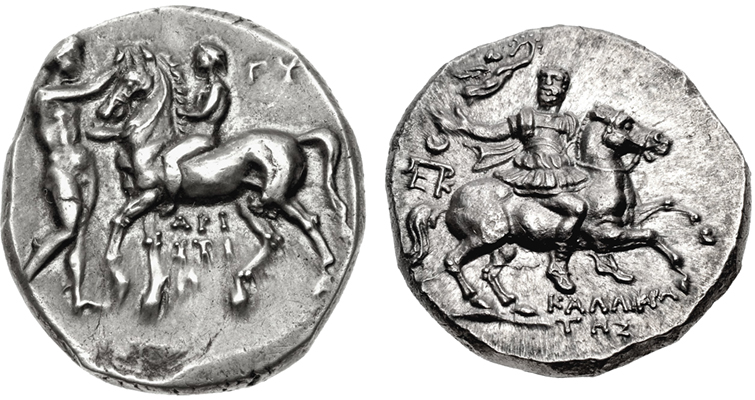 These coins were struck after circa 280 B.C., when the mint at Taras issued didrachms of a reduced weight standard.

From the Ancients Today column in the Nov. 7, 2016, monthly issue of Coin World

The city of Taras, known to the Romans a Tarentum, was founded by Greek colonists from Sparta along a large, natural harbor on the instep of the “heel” of Italy.

From the late sixth through the late third centuries B.C., Taras produced one of the most significant and interesting coinages of south Italy.

Though fractional silver coins and periodic issues of gold and base metal coins were produced at Taras, its principal coinage was the silver didrachm or nomos.

When introduced in about 510 or 500 B.C., this trade coin weighed about 7.8 grams, and its weight remained steady until about 280 B.C., when it was reduced to about 6.6 grams, perhaps to match the Roman weight standard of 6 scruples.

A final weight reduction occurred in 212 B.C., when Taras was briefly occupied by the Carthaginian general Hannibal. While there, the invader struck coins of the familiar Tarentine designs, but the largest of his silver coins weighed just 3.3 to 4 grams — equal to a Punic half-shekel.

Almost every Taras didrachm struck from circa 425 or 400 to 209 B.C. shows on its obverse a horseman and on its reverse a young man riding a dolphin. Although these core designs remained constant, the variety of the scenes is astonishing. In this column we’ll take a look at the horsemen that (typically) appeared on the obverse.

Like all designs on ancient Greek coins, those used at Taras were symbolic of aspects of religion, lore, mythology, political circumstances, “industry” or events of local importance. The horsemen of Taras are no exception.

The Horseman designs are thought, generally, to have reflected the worship of the Dioscuri, the mythical twins worshipped at Taras’ mother city, Sparta. The horse and rider type may also relate to the worship of local horse deities, and in some cases they allude to athletic events or to aspects of military training, for Taras was famous for its cavalry.

The chronology of the coinage at Taras has been the topic of intensive study, and still is not entirely settled. All that can be said with certainty is that hoard evidence has helped greatly in establishing the order of the issues. The design variances on Taras didrachms are of little help in forwarding our understanding of chronology, since precious few of them can be linked with historical events.

The scholar Colin Kraay once remarked that there is no apparent line of development of these many design varieties, and that the “... themes are invented, modified, abandoned and resumed again later on no apparent system.”

To gain an appreciation for the variety and quality of the Horseman types at Taras, we’ll examine 10 examples, all of which are illustrated here.

One of the early Horseman types shows a nude youth holding tight onto the rein as his horse leaps powerfully forward. This die was cut by a talented engraver who likely performed his work in the early fourth century B.C.

Another didrachm, struck a few decades later, is an equally accomplished work of art, but has a militant theme. In this case the rider is a warrior, nude except for his crested helmet. He is dramatically posed, pulling back on the horse’s rein as he holds aloft a shield and a lance.

A didrachm of the 330s B.C. bears one of the finest and most recognizable Horseman types of Taras. It shows a nude warrior on horseback, holding the rein with his left hand as he raises a lance with his right hand. Strapped to his left arm are two lances and a shield.

From the same brief period is a comparatively tranquil scene, also engraved in fine style. In this case the young nude rider crowns the horse as he is crowned by Nike flying overhead. This design may commemorate a victory in an athletic contest.

A closely related scene appears on an artistic didrachm that also was produced in the 330s B.C. Here a young nude rider is also crowned by Nike, but this time a riderless horse is added to the design.

From to a slightly later period, either circa 332 to 302 B.C. or circa 290 to 281 B.C., is a didrachm that shows a warrior, presumably nude, crouched behind a large shield emblazoned with a dolphin. In his right hand he holds two lances.

A particularly energetic and well-engraved scene appears on a didrachm of the early third century B.C. Here a nude horseman with a small shield (a buckler) and a lance dismounts his galloping horse. This challenging act may have been an athletic event that would have doubled as training for a maneuver that might be useful in combat.

From the same period is a didrachm with an intricate scene of a nude warrior, helmeted and armed with shield and lance, who rides a horse that is met by Nike. The goddess is in the midst of restraining the horse, and one can only speculate as to the implications of this compelling design.

A similar composition appears on a didrachm of circa 280 to 272 B.C., in which the horse is met by an attendant rather than by Nike. Though the format is similar to that of the previous coin, it is tranquil by comparison: the horse is ridden by a nude youth rather than by an armed warrior, the horse is standing rather than charging, and it is not restrained, but willingly receives the attention of the standing figure, who crowns its head with a wreath.

Among the last silver coins produced at Taras before the arrival of Hannibal is this didrachm of circa 240 to 228 B.C., when the city had struck an alliance with Rome. It shows a heavily armored warrior on a rearing horse. The engraver portrayed the soldier three-quarters facing and with a flowing cape. Interestingly, he extends his right hand as he’s crowned by Nike, which makes for a memorable composition. 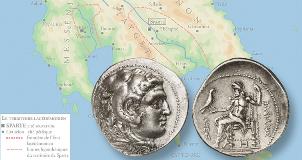 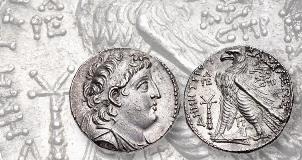 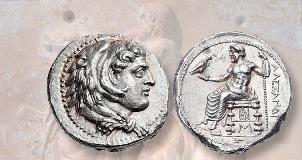