The Baums Collection of historic medals offered at Künker 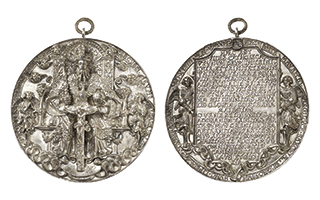 A selection of choice and rare historic medals will be offered by the German auction house Fritz Rudolph Künker with its March 13 auction of the Georg Baums Collection.

The auction take place part of the firms spring auctions, March 10 to 14, at the Steigenberger Hotel Remarque in Osnabrück, Germany.

The catalogs introduction shows how Baums looked at collecting as a thoughtful, academic process rather than mere accumulation, where individual historical items work together in a collection to tell a larger story.

In assembling this collection of more than 1,100 medals, Baums took a broad approach as he explored historical path of the medal from the Renaissance to the present, while collecting the topics and designs that appealed to him.

For him, an interesting element of the medal was the limited area available to the medallic artist and how an artist must depict a selected topic in such a way that the viewer recognizes the subject immediately. When successful, the reduction of a substantial topic into a recognizable, but almost shorthand, depiction is what gives the medal its great charm.

In the introduction to the auction, Baums admits that his collection could grow for another 20 years, but that the medals that compose the portion of the collection offered at the Künker auction can inspire other collectors to build their own collections. Baums took an active role in the preparation of the auction and characterizes the work in putting the sale together as an exciting time. Estimates for individual medals range from 25 euros (about $34 U.S.) to 40,000 euros ($54,995 U.S.).

One of the auction highlights is the famous Trinity medal created by Hans Reinhart the Elder in the 16th century.

Surprisingly, little is known about Reinhart, although he is considered one of the leading German medalists. He was likely born in Dresden circa 1510 and was a citizen of Leipzig in 1539. Until his death in 1581, he created at least 26 signed portrait and satirical medals between 1535 and 1544, with another 30 or so medals that can be attributed to him.

His approach was experimental for its time, using soldering for decorative effect and to maximize the relief. A single medal of his may contain multiple cast pieces. In this Trinity medal, casting and soldering were used to make the fine locks of the seated figures beard.

It adds: "As Lutheran beliefs became more widespread in the Holy Roman Empire, the manufacture of medals with a biblical narrative or Christian message developed. Struck religious medals were produced in large quantities at the Saxon mints connected to the mines of Annaberg and Schneeberg, possible because of the new large supplies of silver."

Due to the medals immense popularity, it was often recast and imitated. The example from the Baums Collection bears the year 1544 and belongs to the first edition. Just three years later, Hans Reinhart the Elder was granted entry into the Leipzig guild of goldsmiths, in 1547.

Catalogs of the firms spring auctions may be viewed online at the firms website, www.kuenker.de. For more details, telephone the firm at (011) 49 541 96 20 or email it at service@kuenker.de.