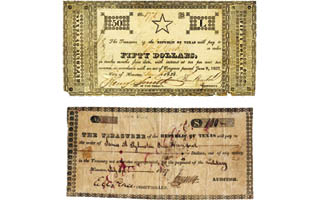 The Republic of Texas note (a $50 note is shown), commonly known as “Star Money” for its design, was issued from the city of Houston from 1837 to 1838. A complete set of “Star Money” is one of several themes in an Austin exhibit. The $100 warrant, also part of the exhibit, is payable to Sgt. James A. Sylvester as his military pay for capturing Mexican President Santa Anna the day following the battle of San Jacinto.

A new exhibit, “On the Run: Currency, Credit and Capitals of the Republic of Texas,” is now on display at the Texas Capitol Visitors Center in Austin through June 22, 2014.

The financial history of Texas when it was its own independent nation sounds like it could be written today, with budget shortfalls, government gridlock and a national credit crisis.

Bevill said the exhibit was “brought together by a handful of private collectors and with loans of material from the John N. Rowe III Collection of Texas Currency at the DeGolyer Library at Southern Methodist University, the University of Houston – Special Collections Library and the American Numismatic Association.”

Admission to Texas currency exhibit and all other exhibits at the Capitol Visitors Center is free.

The Texas Capitol Visitors Center is located on the southeast corner of the Capitol Grounds and is housed in the historic General Land Office Building, which was completed in 1857.