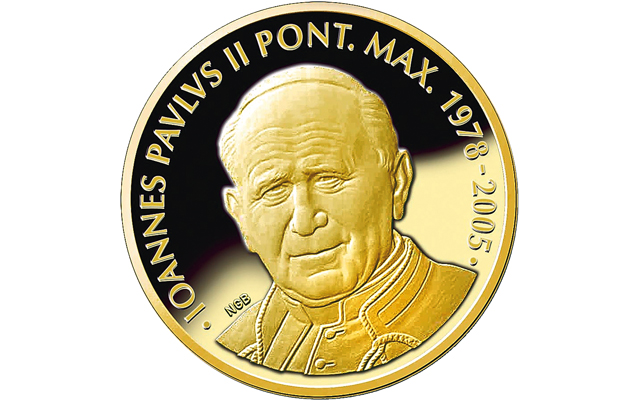 To mark the 10th anniversary of his death, Malta has issued a Proof gold €5 coin celebrating the life of Pope John Paul II.

The Central Bank of Malta commemorates the 10th anniversary of his death with a 2015 Proof €5 gold coin.

The coin was released April 30 and was designed by Noel Galea Bason.

The obverse of the coin shows the emblem of Malta with the year of issue 2015. The reverse depicts a portrait of Pope John Paul II.

Karol Josef Wojtyla was born in Wadowice, Poland on May 18, 1920. He was the youngest of three children born to Karol Wojtyla and Emilia Kaczorowska.

The .999 fine gold coin was struck by the Royal Dutch Mint.

The coin weighs a half-gram, measures 11 millimeters in diameter and has a mintage limit of 5,000 pieces.

The coin may be purchased by completing an order form found at the Central Bank of Malta’s website.