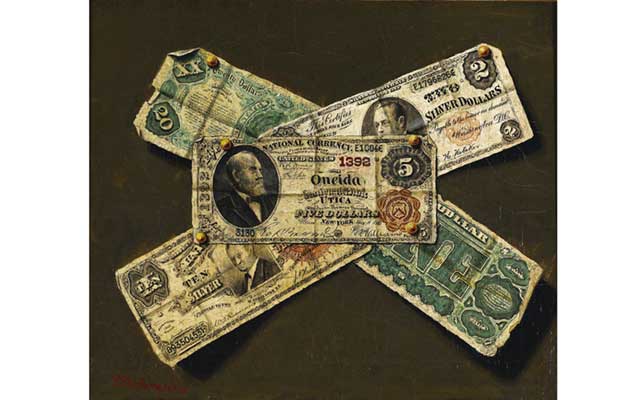 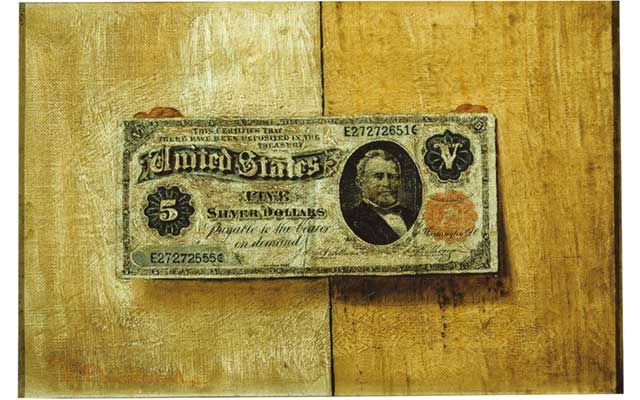 The late 19th century trompe l’oeil artist Victor Dubreuil is certainly enigmatic, as are the paintings depicting currency contemporary with his era that he created.

His work occupies a prominent place among trompe l’oeil still life painters working in New York during the last quarter of the 19th century, largely because he signed his paintings, but much of his life remains a mystery. Today he’s best known for his depictions of money, but why was he obsessed with this theme?

Some believe that the artist’s obsession with money stemmed from the fact that he didn’t have any throughout his life, but that’s conjecture, as are many elements of his life. Even his date of birth is debated, with some authorities providing a birth year of 1842 and others pointing to 1846.

What’s known is that he was active as an artist in New York from around 1880 to 1900, before returning to France, where his date of death is unknown.

His depictions of money were at times so accurate that the Secret Service took an interest in his work, and it is suspected that his paintings (along with the paintings of his contemporaries) may have run afoul of counterfeiting laws. His works today are collected by museums but appear on the market with enough frequency to be accessible to collectors.

His biography and oeuvre together create a fascinating picture of the various elements impacting paper money in the United States during the late 19th century.

A life of mystery

Dubreuil was born in the town of Ayron, near Paris, France, to middle class parents on Nov. 8, 1842 (some sources state), and in his youth fought in the Franco-Mexican War. Upon his return to Paris he worked as a bank clerk and in 1878 he married Virginie Lenoir, a widow who was 15 years older than him. During this time he was deeply interest in Socialist politics, and as a political gesture, stole 500,000 francs from his bank (though he termed it borrowing) and left the bank bankrupt.

He set sail for New York — leaving his wife behind — arriving on June 6, 1882, and found work again at a bank. Soon he was painting still life pictures while teaching himself how to paint.

Always the hustler, he tried his hand at several different types of inventions, such as a pulley-controlled pair of suspenders, but he self-identified mostly as an artist.

His work drew the attention of patrons at the Seventh Street Saloon in New York, where his pictures — especially those depicting overflowing wooden barrels of money — captured the interest of patrons.

In some paintings he used trompe l’oeil illusionistic painting techniques to depict objects, placing them in context with one another to convey complex allegories that related to social elements of the time and tied into his interest in leftist politics.

Other paintings seemed to be created more for the art market and for collectors who enjoyed his ability to fool the viewer and paint illusions of money.

The owner of the saloon, William Roach, was a devoted patron of Dubreuil, and his establishment was the home of fun, merriment and frequent scams aimed at separating gullible people from their money.

Dubreuil’s paintings were placed around the saloon, in the words of one contemporary writer, “to impress visiting ‘guys’ with ideas of untold wealth.” The visitors were generally from outside the United States and what made the scams successful was that the scam involved counterfeit money. As such, the victims of the scam could not report those who deceived them to the police without themselves being incriminated as purchasers of counterfeit money.

A contemporary newspaper, The New York Herald, reported on one scam, writing that the paintings lining the saloon’s walls were “done by an old man who represented a million dollars on canvas three feet square for a fee of twenty dollars or so.” Dubreuil was upset by this characterization, replying in a letter to the editor, “I painted the pictures referred to but was paid a great deal more than the sum mentioned and never believed, nor do I now believe, the pictures were intended to further any evil purposes. As I am well known on the west side as the painter of these pictures I trust, out of justice to me, you will print the above.”