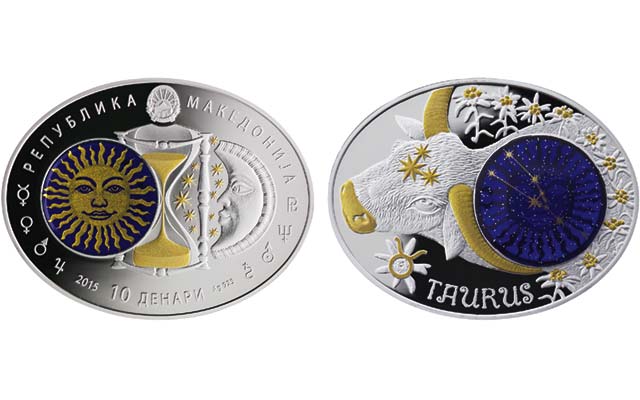 Macedonia’s Zodiac Signs series of Proof .925 fine silver 10-denar coins continues with the 10th issue, honoring the Taurus. A golden-tinged bull on the reverse represents the astrological animal on the 2015 coin.

The new coin was issued by the National Bank of the Republic of Macedonia. International Coin House in Europe is coordinating the issue of the coin, which was released March 25.

The obverse carries the common design for the series (the only changing element in the two-year Zodiac Signs series is the date). An hourglass appears at the center of the design, with a fanciful golden sun placed within a blue cobalt adornment appearing to the viewer’s left. A fanciful crescent moon and stars appear to the right of the hourglass. Zodiacal symbols of the planets, as well as inscriptions in Macedonian, complete the scene.

The bull dominates the reverse, which includes a cobalt glass insert bearing the astronomical constellation printed in gold. Flowers accented in gold and the Taurus symbol (also in gold) fill the scene.

U.S. distributor First Coin Company will offer the coin, as it has offered the other nine issues in the series. Though pricing is not yet set, the distributor expects the price to be close to, if not the same as, the other examples, which retail for $76.90 at press time.

Want to know about other coins in this series? Coin World has the news!