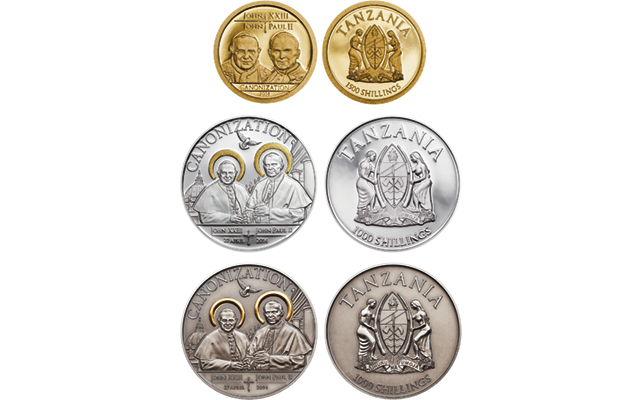 Three new coins from Tanzania celebrating the canonization of two popes are available from a U.S. distributor. The program includes a gold 1,500 shilling, top, and two silver 1,000-shilling coins: a standard Proof coin with gold plating, middle, and the other also with gold plating but with an antique silver finish, bottom.

Pope Francis is scheduled to canonize two popular predecessors, Popes John XXIII and John Paul II, in a public mass on April 27. The event will be the first time in the history of the Roman Catholic Church that two popes will be canonized on the same day

The African nation of Tanzania is commemorating the event with four coins: one gold, two silver and one gold-plated copper coin.

Both leaders appear together on the reverses of all four coins, designs of which are paired with the coat of arms of Tanzania on the obverse.

Angelo Giuseppe Roncalli was Pope John XXIII from 1958 to 1963. Even today Italians call him “il papa buono” – “the kind pope.”

As initiator of the Second Vatican Council, he ensured the modernization of the Catholic Church, mediated in the Cuban Missile Crisis in 1962, and with the encyclical Pacem in terries (Peace on Earth), established a new attitude of the church toward human rights. Pope John XXIII was beatified by Pope John Paul II in September 2000.

The College of Cardinals elected Karol Wojtyla as Pope John Paul II in 1978. He served as pontiff for more than 25 years, visiting 129 countries and writing 14 encyclicals. He gave more than 20,000 speeches, met with more than 1,500 heads of state and appointed 231 cardinals. In 2011, six years after his death, he was beatified by Pope Benedict XV.

The Prooflike gold-plated copper coin (weighing 25 grams and measuring 38.61 millimeters in diameter) has sold out its 2,500-coin mintage limit. However, the other three coins remain available through distributor Coin & Currency Institute.

Two .925 fine silver 1,000-shilling coins are available, each with partial gold plating (handmade leaf gilding) on the halos above the saints. One version has a standard Proof finish while the other is described as having an antique silver Proof finish. Both coins weigh 28 grams, measure 38.61 millimeters in diameter and have mintage limits of 1,000 pieces.

The regular Proof silver coin costs $119, while the version with an antique silver Proof finish costs $89.50.

Shipping and handling charges are $5.75 per order.