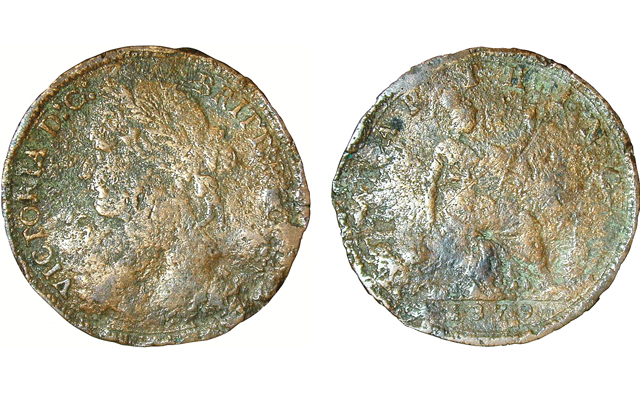 This 1879 bronze farthing coin from England was discovered in a roll of what should hae been only United States 5-cent pieces.

Finding something in a roll that was completely unexpected is always fun for me.

A discovery I at first thought was a badly hammered and corroded U.S. cent coin actually turned out to be a piece that originated in Great Britain more than 135 years ago. The beat-up 1879 bronze farthing featured this month was discovered in a roll of what should have been United States 5-cent pieces.

The word farthing is derived from “fourthing,” with the coin being valued at one quarter (1/4d) or one-fourth of a British penny. That’s the equivalent of one nine hundred and sixtieth (1/960th) of a British pound sterling.

Minted in a bronze composition and struck from 1860 to 1956, the obverse of the farthing bore the portrait of the reigning monarch.

Two reverse designs were used during this denomination’s lifetime.

The earlier reverse, in use from 1860 until 1936, was designed by Leonard Charles Wyon and features the image of Britannia seated.

The design from 1937 onward, by H. Wilson Parker, depicts a wren.

The farthing ceased to be legal tender when it was demonetized in 1960.

The reverse of the coin exhibits a seated Britannia facing right while holding a shield and trident. The word FARTHING is seen above, and the date is visible below.

Admittedly, some of the details on the coin that I found have to be imagined as you look at this piece, since so much of the surface is worn away. But even with all the extraneous damage, this coin was a great find.

As we enter the holiday season, please be reminded that this is an excellent time to do some extra roll searching.

I have always found that many coins that had been stored in jars and coffee cans all year begin to emerge at local banks.

Since this is the time of year when many people roll up and cash in their loose change, to use the cash for their holiday shopping, we can often find some fairly unusual coins in rolls!

Especially ask your bank tellers for half dollars and large-sized dollar coins, as this is the time of year that they will be cashed in by many of the bank’s customers.