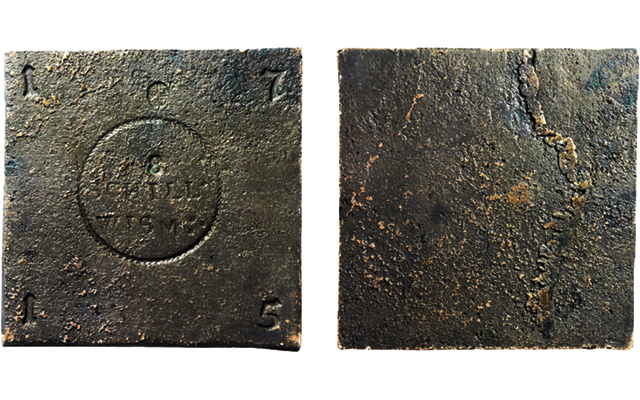 A very rare 1715 8-schilling piece of Swedish plate money was made during the siege of Wismar and is one of between eight and 10 examples surviving today.

Swedish plate money is sufficiently rare that an auction containing a handful of pieces is generally worth mention.

Far rarer is the auction appearance of an entire collection of the pieces. One of the most extensive collections of Swedish plate money ever offered at public auction will highlight the Stack’s Bowers Galleries sale during the New York International Numismatic Convention, Jan. 9 and 10, 2015, at the Waldorf Astoria Hotel.

This collection of nearly 90 pieces features a sample of the large copper “coins,” ranging from half-daler to 4-daler sizes.

The plate money was issued as a replacement for silver and gold coinage, as specie in these metals was scarce in Sweden and its possessions while copper was readily available in massive quantities. These large “coins” were issued from 1644 to 1776 in denominations from one-third daler to 8 dalers. The copper came not just from mines but also from cannon barrels that were repurposed and used to produce these coins.

Many known examples of Swedish plate money were recovered from the wreck of the Nicobar, a Dutch East India Co. ship that struck a reef near Cape Agulhas, South Africa, and sank July 11, 1783.

The collection being offered by Stack’s Bowers is dubbed the “Stanley Aberdeen Collection.” The collector’s name has not been disclosed. He began collecting these pieces when Ponterio & Associates sold the pieces recovered from the wreck of the Nicobar beginning in 1991.

The highlight of the collection is an example of necessity coinage made from melted cannons during the siege of Wismar during the Great Northern War.

Wismar was a Swedish possession along the Baltic coast of Germany, obtained through the Treaty of Westphalia in 1648. During the Great Northern War, it was besieged by a coalition of Danish, Norwegian, Russian, Saxon, Brandenburg-Prussian and Hanoverian troops. After four years the city fell, in 1716.

In autumn of 1715 the garrison handled a severe coinage shortage by countermarking circulating silver coinage, and melting cannons for making plate money.

The hardness of the metal made production difficult, and the pieces are crude. Some 1,260 pieces were reportedly made, with 60 surviving across six denominations. Between eight and 10 examples of the 8-shilling issue are known, according to the auction house, and several of those are in museum collections.

Graded Extremely Fine by the auction house, it is estimated to realize between $5,000 and $7,000.