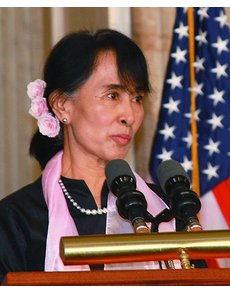 The presentation during formal ceremonies in the U.S. Capitol Rotunda was made more than four years after the medal was approved by Congress. The Daw Aung San Suu Kyi Congressional Gold Medal Act, Public Law 110-209, was signed into law in 2008.

The legislation cites that the medal is awarded “in recognition of her courageous and unwavering commitment to peace, nonviolence, human rights, and democracy in Burma.”

Suu Kyi, a Nobel Peace laureate and former political prisoner, was formally presented the medal during congressional ceremonies scheduled in conjunction with her visit to the United States.

“This is one of the most moving days of my life, to be here in a house undivided, a house joined together to welcome a stranger from a distant land,” she said, “yet I do not feel myself to be a stranger, for I see many familiar faces, and faces that are new to me, but known through what they have done for my country and for our cause,” she said Sept. 19.

The rulers of Burma, a nation formally known as the Republic of the Union of Myanmar, prohibited her from leaving the nation for more than two decades. Suu Kyi, chair and general-secretary of the National League for Democracy, was placed under house arrest by military leaders in 1989. She remained under house arrest in Burma for almost 15 of the 21 years from July 20, 1989, until her most recent release Nov. 13, 2010.

The obverse and reverse designs for the Suu Kyi medal were designed and sculptured by Donald Everhart II of the U.S. Mint’s engraving staff.

The medal’s obverse features a portrait of Suu Kyi with the inscription DAW AUNG SAN SUU KYI around the border. The likeness of Suu Kyi was based on a photograph by Eddie Adams, the Pulitzer Prize- winning American photographer and photojournalist.

The reverse depicts a peacock with the inscriptions DEDICATED TO PROMOTING FREEDOM AND DEMOCRACY IN BURMA and ACT OF CONGRESS 2008.