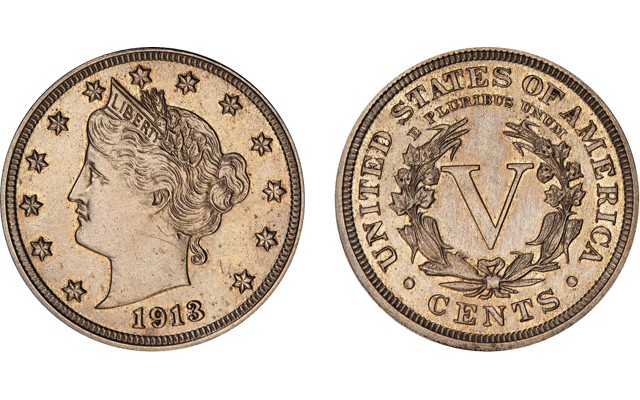 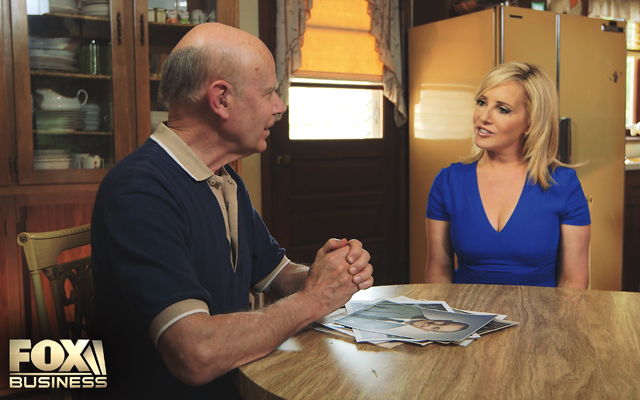 One of George Walton's heirs, Ryan Givens, left, is interviewed at his Roanoke, Va., residence by Jamie Colby, host of "Strange Inheritance." 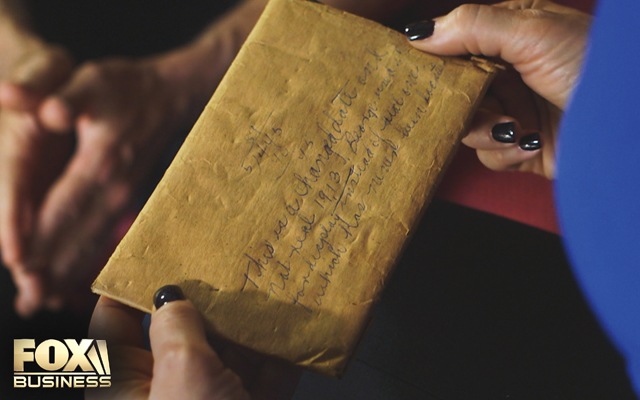 This envelope contained the Walton 1913 Liberty Head 5-cent coin housed in its custom acrylic holder. Written on the envelope is text indicating the coin was a "changed date," misinformation that Walton's heirs believed for more than 40 years.

The Feb. 2 segment of Strange Inheritance, a new reality series broadcast on the Fox Business Network, will be devoted solely to the George Walton example of the 1913 Liberty Head 5-cent coin.

The show is to air at 9 p.m. Eastern Time. A video trailer appears below.

For the Feb. 2 segment, host Jamie Colby interviewed one of Walton's heirs, Ryan Givens, at his Roanoke, Va. home; Paul Montgomery, one of six numismatic experts that authenticated the coin at the American Numismatic Association's World's Fair of Money in Baltimore in 2003; Mason Adams, a newspaper reporter who covered the story locally in Roanoke; and Jeff Garrett, who, like Montgomery, was one of the authentication experts.

Garrett, owner of Mid-American Rare Coin Galleries in Lexington, Ky., also became a minority owner in the coin when he placed the winning bid on behalf of himself and majority owner Larry Lee from Coin and Bullion Reserves, Panama City, Fla., when the family sold the coin.

The family auctioned the coin through Heritage Auctions on April 25, 2013, when it sold for $3,172,500. The price for the coin, certified Proof 63 by Professional Coin Grading Service, is the $2.7 million hammer price plus the 17.5 percent buyer’s fee.

The following is text from that interview:

1. What is the premise of the new reality series Strange Inheritance?

At one time or another we all are given a family heirloom or inheritance or we may be the one to leave something special for our heirs. It occurred to us that there were an infinite number of these situations in America.  Now that folks have seen how odd some of the inheritances we've shown in the episodes of this original new show that have aired they are totally getting what the last eight months of my life shooting it was like! Different! Odd! Awesome!

2. How did the series develop?

Fox Business provides daily financial news to folks following it, working within that industry or everyday folks like the families I met on Strange Inheritance who are keeping an eye on their finances and financial future. Taking it a step further, we realized that beneficial or a burden, families all deal with inheritances. The stranger or more unexpected the bequest, the more fascinating the story.

3. How long is each segment?

Each family is the focus of a half hour of prime time TV on Fox Business. The show definitely goes a step further than other shows like Antiques Roadshow and American Pickers too. What we do is introduce viewers to the inheritance and the family giving and getting it but also where it came from, what it means for the family and I think most interesting what's is value is BOTH financially and to preserving a legacy. Whether it's a blood-stained civil war uniform sleeve, an alligator park, a nickel declared a fake that may actually be worth more than an heir ever imagined or ranchland once unearthed reveals what experts tell us is the greatest dinosaur find of our lifetime, there's a vast story to tell in each it was a challenge to fit it into a half hour!

4. Is there more than one story per segment?

Within each episode the focus is a single family but we do go back in many cases several generations. We might give comparables for example in our premiere episode The Black Swamp Baseball Card find of other card collections that sold for comparison but when you have an inheritance like that which if sold all at once would crash the entire baseball card collection according to Heritage Auction house there's plenty to explore.

5. What qualifies an inheritance to be “strange”?

We have an amusement park inheritance, both Bonnie and Clyde's death car guns, a rare Native American art collection and a classic car collection totaling more than 3000 cars. We also have two out of work actors who inherited a million dollar farm in Illinois from a hermit they never met but was obviously a fan. Each in their own way is strange!

6. How did you learn about the story of the legacy of the George Walton 1913 Liberty Head 5-cent coin?

I've always been interested in coins and when I read about George Walton, his collection and tragic passing I was determined to learn more. Meeting the heir of this rare 1913 Liberty head nickel, learning that it had sat in a shoebox marked "fake do not sell" for decades blew my mind. Attending my first coin show as well and talking to several coin collectors and experts gave me incredible insight into the importance of coin collecting too. I'd always as a practicing attorney advised clients to diversify their holdings to include "hard" assets like art, real estate and gold and silver. I feel even stronger about that investing approach now.

7. What about the story intrigued you?

That if the secret service after declaring this nickel a fake hadn't returned it the fifth Liberty head nickel known to exist might never have been found. Also, that once it was returned to the family and told it was fake it didn't just end up in a coin jar or purse and get spent at the grocery store!

8.  What did you learn in your research about the 1913 Liberty Head 5-cent coin in general, and the Walton coin in particular?

That a rogue reserve employee had access to make the coins in the first place. That originally the five made were held together and that the collection was then split up. That a five cent piece can actually be worth millions. I still can't believe that!

9. Who did you interview for the Feb. 2 segment?

We interviewed Ryan Givens the heir who inherited the nickel in Roanoke where he lives, Paul Montgomery and coin expert who wrote a book about the 1913 Walton nickel, Mason Adams a newspaper reporter who had covered the story in Roanoke and Jeff Garrett the coin dealer who bought the nickel at auction.

10. What made you want to devote the entire segment to the Walton coin?

The nickel was much deserving of its own episode. There was no question especially once I saw the completed episode that the characters, timeline and the nickel's travels itself could have been an hour special but the half hour has some of the most suspense, edge of your seat moments we brought to the program in the 26 episodes we've shot so far. It's an amazing story and I believe it will inspire people who don't collect coins to start.

11. Are you, personally, a coin collector, and if so, what do you collect?

I've bought coins over the years and have a number of them from my father that he bought for my son. At the coin show I attended in Illinois last year, the same show where a few years prior the Walton nickel was sold I got so caught up in the excitement I almost spent way more than I could or should have. Walking the show floor and sitting at the auction my heart was beating out of my chest!

12. How did you learn about Coin World?

I've known about Coin World for years and after shooting this episode I really wanted to share my excitement and enthusiasm for coin collecting and this episode of Strange Inheritance with Coin World so it's a thrill that you asked me. I also am hoping other collectors will reach out to me at jamie@strangeinheritance.com with other remarkable inheritances. I definitely want to do more rare and valuable coin collection episodes!