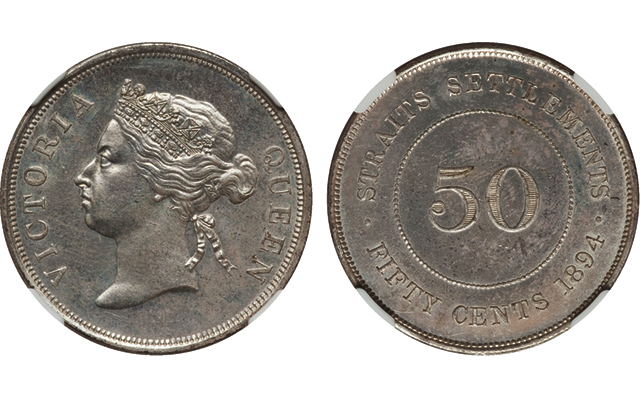 The 1894 Straits Settlements silver 50-cent coin was issued by a crown colony late in Queen Victoria’s reign. The example shown illustrates the design on the coin the reader asks about, and is not the piece he owns.

I am attempting to find information on the Straits Settlements 50-cent coin that I have. It appears to be in Uncirculated condition, with no scratches, rim dings or evidence of rubs on the highest areas.

The reader submitted images of an 1894 silver 50-cent coin from the Straits Settlements.

The Straits Settlements, on the Malay peninsula of Asia, was formed in 1826 and ruled by Britain’s East India Company. It was part of British India from 1858 to 1867, before being made a crown colony. In 1939, it became part of Malaya.

Most of the area in the historic Straits Settlements is now part of Singapore and Malaysia.

The colonial coinage debuted in 1871, with the release of quarter-cent, 5-cent, 10-cent and 20-cent coins. Cent and half-cent coins followed in 1872, and finally the 50-cent coin, the largest denomination, was issued in 1886.

These coins show Queen Victoria on the obverse; reverses show their respective denomination.

The 50-cent coin was about the same size as and contained slightly less silver than the Barber half dollar then in circulation in the United States. A closer comparison might be to the Canadian 50-cent coin, another silver decimal coin from a crown colony — the Canadian and Straits Settlements coins are nearly identical in size and silver content.

In 1894 the 50-cent coin of the Straits Settlements had a mintage of 52,000 pieces. Though it is rare compared to, say, a U.S. coin, no overwhelming demand for it arises from collectors building Straits Settlements coin sets by date and Mint. The piece attracts collector interest merely as a type coin.

Multiple examples in the past few years, exhibiting damage or in lower, circulated grades, have failed to sell at auctions in Hong Kong, Germany, London, the United States and beyond.

A recent example sold at public auction was graded Extremely Fine 45 by ANACS.

Coin World does not grade or authenticate coins, so the reader should consider submitting the coin to a third-party company if he desires those services.